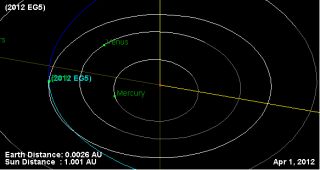 An asteroid the size of a passenger jet zoomed near the Earth Sunday (April 1), just in time for April Fools' Day, but the space rock flyby posed no threat of hitting our planet, NASA officials said.

The asteroid 2012 EG5 was closer than the moon when it flew by Earth at 5:32 a.m. EDT (0932 GMT). The space rock is about 150 feet wide (46 meters), according to a NASA records. Scientists with the space agency announced the April Fools' asteroid flyby on Friday, March 30.

The space rock may have visited Earth on April Fools' Day, but its flyby was no prank. The asteroid crept within 143,000 miles (230,000 kilometers) of Earth during its closest approach, which is just over half the distance between Earth and the moon's orbit. The moon typically circles the Earth at a distance of 238,000 miles (382,900 km).

Like asteroid 2012 EG5, those two smaller space rocks on Monday posed no risk of hitting Earth. Those space rocks were so small they would not survive the trip through Earth's atmosphere, even if they were aimed at our planet, Asteroid Watch researchers said.

Scientists with NASA's Near-Earth Object Program at JPL and other teams of astronomers regularly monitor the sky for larger, potentially dangerous asteroids to determine if they pose an impact threat to Earth.