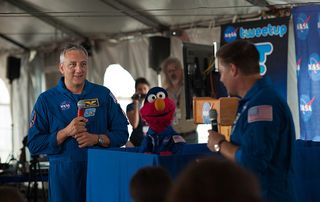 NASA's Twitter feed has won a Shorty Award for the best government use of social media.

"The Obama administration has placed a high priority on openness and on-line communications, and @NASA is honored to be recognized for its social media efforts with a Shorty Award," David Weaver, NASA's associate administrator for communications, said in a statement. "We are inspired by the social media community and their passion for sharing our compelling story of reaching for new heights and keeping America the world leader in space exploration."

The award is NASA's third Shorty overall. The space agency won one in 2009 for its use of Twitter during the Mars Phoenix Lander mission, which found water ice just beneath the dirt near the Red Planet's north pole.

Further, astronaut Doug Wheelock won the Real Time Photo of the Year Shorty in 2011 for his "Moon from Space" snapshot.

@NASA has more than 2 million followers, and the space agency maintains presences on Facebook , Google+, Flickr, and other platforms. NASA also frequently holds events called Tweetups, which allow its social media followers to attend functions and interact with NASA engineers, scientists and astronauts.

The Shorty Awards, which some call the the Oscars or Grammys of social media, have been held every year since 2009. This year's winners were announced Monday night at the Times Center in New York, during an event hosted by "The Daily Show's" Samantha Bee and Jason Jones.

Other notable Twitter accounts that won a Shorty this year include @Instagram and @justinbieber, which won in the app and celebrity categories, respectively.