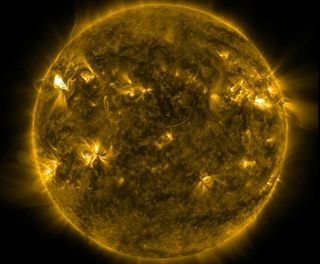 This image, captured in the first week of March, shows the sun in the midst of a flurry of eruptions.
(Image: © NASA)

A recent spate of furious eruptions on the surface of the sun hurled a huge amount of heat toward Earth — the biggest dose our planet has received from our closest star in seven years, NASA scientists said.

The March 8 through 10 solar storm shot enough energy toward Earth to power every home in New York City for two years, according to space agency researchers.

Although the influx of solar energy puffed up the atmosphere, increasing drag on low-orbiting satellites, it caused fewer disruptions to electronic infrastructure such as electronic grids than some expected. It also offered plenty of eye candy, sparking dazzling auroras in many places.

"It was a big event, and shows how solar activity can directly affect our planet," Martin Mlynczak of NASA Langley Research Center said in a statement.

The solar eruptions began on March 6, and on March 8 a coronal mass ejection — a wave of charged particles — smashed into Earth's magnetic field.

For the next three days, the upper atmosphere, known as the thermosphere, absorbed 26 billion kilowatt-hours of energy.  Infrared radiation from carbon dioxide and nitric oxide, the two most efficient coolants in the thermosphere, radiated 95 percent of that total back into space.

"The thermosphere lit up like a Christmas tree," said James Russell of Virginia's Hampton University.

Both Russell and Mlynczak work with SABER, an instrument aboard a NASA satellite. The instrument monitors infrared emissions from Earth’s upper atmosphere, particularly from carbon dioxide and nitric oxide. Both compounds play a key role in the energy balance hundreds of miles above our planet's surface.

Mlynczak said that, despite the impressive numbers, there's no way to harness the incredible amount of energy the sun shot at the Earth. "It’s so diffuse and out of reach high above Earth's surface," he said. And, he added, carbon dioxide and nitric oxide send the majority of the energy back into space.

Although the early March solar storm is ended, the scientists said there is plenty more to come.

"We’re just emerging from a deep solar minimum," Russell said. "The solar cycle is gaining strength with a maximum expected in 2013."