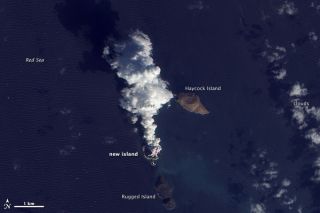 A plume rises from a new island in the Red Sea on Dec. 23, 2011 in this satellite view. The smoke plume and new island were created in a volcanic eruption in December 2011.
(Image: © NASA Earth Observatory)

The Red Sea has a new inhabitant: a smoking island.

The island was created by a wild eruption that occurred in the Red Sea earlier this month. It is made of loose volcanic debris from the eruption, so it may not stick around long.

According to news reports, fishermen witnessed lava fountains reaching up to 90 feet (30 meters) tall on Dec. 19, which is probably the day the eruption began, said Erik Klemetti, a volcanologist at Denison University in Granville, Ohio.

Ash plumes were seen emanating from the spot  Dec. 20 and Dec. 22 by the Moderate Resolution Imaging Spectroradiometer (MODIS) on NASA's Terra and Aqua satellites. The Ozone Monitoring Instrument  on NASA's Aura satellite detected elevated levels of sulfur dioxide, further indicating an eruption. By Dec. 23, what looked like a new island had appeared in the Red Sea off the west coast of Yemen.

"I am surprised about how quickly the island has grown," Klemetti, who writes Wired's Eruptions Blog, told OurAmazingPlanet.

The volcanic activity occurred along the Zubair Group, a collection of small islands that run in a roughly northwest-southeast line. The islands rise from a shield volcano (a kind of volcano built from fluid lava flows) and poke above the sea surface.

Scientists will keep a close eye on the new island to see if it has staying power.

"Many times the islands are ephemeral as they are usually made of loose volcanic debris, so they get destroyed by wave action quite quickly," Klemetti said. But the volcanic activity could outpace the erosion due to the wave action.

Newly emerging islands aren't unheard of. Other newly emerged islands include Surtsey off of Iceland, Anak Krakatau in the caldera of Krakatoa in Indonesia, and Hunga Tonga-Hunga Ha`apai in Tonga in the South Pacific.

This story was provided by OurAmazingPlanet, a sister site to SPACE.com. Follow staff writer Brett Israel on Twitter: @btisrael and OurAmazingPlanet at @OAPlanet and on Facebook.