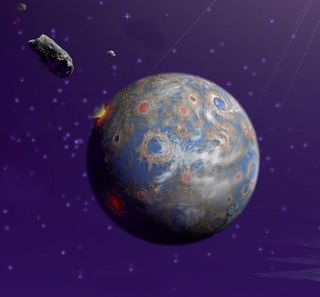 The bombardment of Earth by space rocks some 3.9 billion years ago may have created ideal conditions for microbial life, a scientist says.
(Image: © NASA/JPL)

MINNEAPOLIS — Huge meteorites may not deserve the bad rap they've gotten as life-ending agents of destruction, scientists say. In fact, cataclysmic collisions in space may have set the stage for the rise of life on Earth, scientists say.

Although it's widely accepted that a meteor strike about 65 million years ago killed off the dinosaurs, scientists say a hail of meteorites far earlier in Earth's history may have created ideal conditions for primordial life forms.

"When people think of impact events and life, probably 99 percent think of the extinction of the dinosaurs," said Gordon Osinski, an assistant professor of planetary geology at Canada's University of Western Ontario, who gave a talk on current research on impact craters and their effects here at the meeting of the American Geological Society this week.

"There are always destructive effects but afterward, particularly if you're a microbe, these impacts can be beneficial," Osinski told LiveScience.

During a time known as the Early Bombardment, when the Earth was a half-billion years into its 4.5 billion-year history, a barrage of meteorites smashed into the young planet, which could have provided the necessary materials for a hydrothermal system, similar to today's deep-sea vents.

"All you need for hydrothermal activity is a heat source, plus water," Osinski said.

The colossal meteor and the energy of its impact would have melted rocks for many hundreds of miles, providing the heat; and water, whether as precipitation, ice or contained in small amounts in the Earth's surface, would have been plentiful.

"It would cool slowly over time, but the time scale varies tremendously," Osinski said. "The bigger the crater, the bigger the heat source, the more slowly it cools. How long they last is one of the big unknowns, but for smaller craters, it's tens of thousands of years."

And it turns out that hydrothermal systems are a big suspect in the hunt for the birthplace of life on Earth. [Extreme Life on Earth: 8 Bizarre Creatures]

"The reason hydrothermal systems are thought to be so interesting is you come to the base of the tree of life, and all of those organisms are thermophiles," Osinski explained — heat-loving organisms that thrive in the scalding temperatures of 140 to 176 degrees Fahrenheit (60 to 80 degrees Celsius) found in hydrothermal systems such as Yellowstone's volcano-heated lakes or hydrothermal vents along the seafloor.

"Basically, we don't know where life originated. It's a big open question on Earth. But hydrothermal systems have been suggested as places," Osinski said. "You have energy, food and water — all the key ingredients of life."

Recent research on ancient volcanic rocks retrieved from deep beneath the seafloor during an ocean drilling expedition indicates that glass — created in the Early Bombardment scenario, by the heat of impact — may make elemental nutrients more easily accessible to hungry microbes. Scientists found fossil traces in the porous rocks that may indicate that tiny organisms ate their way through the glass contained in the samples.

Unfortunately for scientists trying to peer back into those long-ago times, no craters older than about 2 billion years survive on the planet. The Earth's surface is endlessly recycled as tectonic plates collide and dive deep into the earth, and then return to the surface.

However, the rocks and debris sent flying by the ancient impacts have survived — which is how scientists have learned about these primordial collisions.

Osinski said this recycling of crust is one big reason geologists wish to return to the moon, which would also have been pummeled by a similar rain of meteorites.

And if impact cratering began life our own planet, where the surface is always destroyed, what might scientists find in a well-preserved environment on another planet?

"The key thing is that impact cratering is ubiquitous — it's the most important geological process in the universe, because it's the only one that occurs everywhere," Osinski said. "If you look at our own solar system, there are many planets that never had volcanoes, or plate tectonics, whereas impact cratering can happen on any planetary object with a solid surface anywhere."

This story was provided by LiveScience, sister site to SPACE.com. Follow LiveScience for the latest in science news and discoveries on Twitter @livescience and on Facebook.