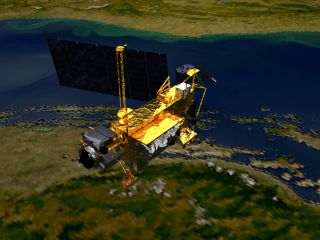 On Friday (Sept. 23), a dead NASA satellite the size of a school bus is expected to enter the atmosphere, break into pieces and rain down upon Earth. Though space agency officials don't yet know where the chunks (some weighing as much as 300 pounds) will hit and haven't narrowed down exactly where, they say the chances of the falling space debris striking a person are extremely small.

The spacecraft, called the Upper Atmosphere Research Satellite (UARS), will plunge to Earth tomorrow afternoon (Eastern Daylight Time) somewhere over Earth, but not over North America, which NASA ruled out as a potential drop zone late yesterday. But 26 large pieces of the huge, 6 1/2-ton satellite are expected to survive the re-entry.

How small? And how does NASA know the changes of an injury are small? Furthermore, this one satellite aside, there are millions of pieces of other broken-down satellites, spent rocket stages and random space junk in orbit around Earth.

So what's the chance that you, reader, will be struck by some piece of former space flotsam in your lifetime?

According to Mark Matney, a scientist in the Orbital Debris Program Office at NASA's Johnson Space Center in Houston, the odds that any of the 7 billion people on Earth will be struck by a piece of the soon-to-fall satellite is 1 in 3,200. "The odds that you will be hit … are 1 in several trillion," Matney said. "So, quite low for any particular person." [Photos of NASA's Huge Falling Satellite UARS]

To make this calculation, Matney explained, analysts work out how much debris will actually make landfall. (Most falling junk just burns up in the atmosphere.) They then make a grid of how the human population is distributed around the globe. Oceans, deserts and the North and South poles are largely devoid of people, for example, whereas coastlines are brimming with them. In short, they must figure out which patches of Earth have people standing on them.

Throwing in a few more minor details, such as the latitudes over which satellites spend most of their time orbiting, the scientists calculate how likely it is that a piece of space debris will strike the ground where a person happens to be. This time around, the odds are 1-in-3,200, and there's a one-in-several-trillion chance that not only will a person get hit, but that person will be you.

Sounds scary? It shouldn't: You're a few million times more likely to get struck by lightning in the next year. [Lightning Strike Survivor Video: Real or Fake?]

So let's assume you dodge this particular satellite. What are the chances you'll get struck by something falling from orbit — space debris or otherwise — during your lifetime?

NASA says it's impossible to nail down the overall risk to an individual posed by all the spacecraft, satellites and space junk currently orbiting us, even though it believes the risk is extremely small.

"It would be difficult and time-consuming to generate the numbers correctly for any particular spacecraft," Nick Johnson, chief scientist for orbital debris, wrote in an email. "To do that for all of the thousands of spacecraft and rockets in orbit — past or present — would not be tractable. Such a calculation cannot be made, in part because we do not know the construction details of foreign spacecraft and launch vehicles."

The European Space Agency, on the other hand, feels more comfortable pinning down the odds: "The annual risk of a single person to be severely injured by a re-entering piece of space debris is about 1 in 100,000,000,000" — one in 100 billion, said Heiner Klinkrad, head of the ESA's Orbital Debris Office. In the course of a 75-year lifetime, then, the odds of getting injured by space junk would be a little less than one in 1 billion. [6 Biggest Spacecraft to Fall Uncontrolled From Space]

By comparison, Klinkrad said, "the annual risk that a single person gets struck by a lightning is about a factor 60,000 higher, and the risk of a serious injury from a motor vehicle accident is about 27 million times higher than the risk associated with re-entry events."

In 1997, the tiny threat of space debris became a reality for Lottie Williams. The Tulsa, Okla., resident became the only person known to have been hit by a piece of space debris. A DVD-size piece of metal from a Delta II rocket struck her shoulder while she was exercising at a park. Luckily, because of wind resistance, it was fluttering to the ground so slowly that she wasn't hurt.

Klinkrad noted that most people accept lightning strikes and car accidents as necessary risks of day-to-day living. In this modern world where we rely so heavily on satellites for communication and navigation, perhaps we must also accept the exceptionally small risk posed by space debris.