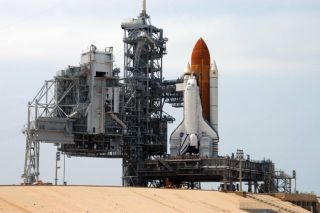 – On Launch Pad 39B, Space Shuttle Discovery is revealed after rollback of the Rotating Service Structure. The Orbiter Access Arm can be seen extended to the cockpit. Discovery will be rolled back to the Vehicle Assembly Building. Once inside the VAB, Discovery will be demated from its External Tank and lifted into the transfer aisle.
(Image: © NASA/KSC.)

CAPE CANAVERAL - ShuttleDiscovery is headed back to the Vehicle Assembly Building,where a new set of booster rockets and external fuel tank are waiting.

The crawler-transportermoved its first few inches on the pad at 6:44 a.m., beginning a journey thatwill last at least six-and-a-half hours.

Rollback was to start around 2 a.m., but delays finalizing engineeringpaperwork held up those plans.

In the VAB over the nextcouple of weeks, Discovery will be mated with a new fuel tank outfitted with aheater designed to prevent ice from forming.

Ice and insulating foam,like the piece that caused a deadly breach in Columbia's wing, are the most common sourcesof dangerous debris that can come off the tank and boosters during launch.

Tests reveal that, withoutthe new heater, ice buildup on a pipeline outside the tank could be a problemas it is filled with supercold rocket propellants.

Inspections of the ship'slanding-gear also found no problems. A small crack on sister ship Atlantisprompted the checkup.

Unlike Atlantis,"inspections at this point show there are no indications of any cracks inthat area," NASA spokeswoman Jessica Rye said.

Discovery rolled out to pad39B on April 6. If all goes as planned, the shuttle will roll out to the padagain in mid-June. NASA officials hope it will fly during a launch window thatopens July 13.