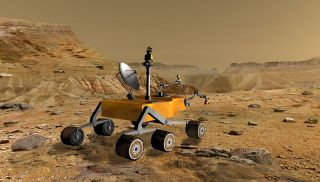 Early concept art of the Mars Science Laboratory -- a long-range, long-duration and heavy-duty rover for carrying out new science tasks on the red planet. It is slated for launch in 2009.
(Image: © NASA/JPL)

As the Spirit and Opportunity rovers continue their extended studies of Mars, NASA's Mars program appears headed for change. The shift will be driven by a variety of factors including technical and budget issues, as well as a "rebalancing" of science objectives.

NASA has been engaged since last year in what the agency calls a road-mapping effort to flesh out the details of a Mars master plan that would lead to an expeditionary crew landing on that remote world.

One scenario that has been under active discussion is slipping the mission of the mobile, nuclear-powered Mars Science Laboratory (MSL) from 2009 to 2011. Another possibility was building two MSL rovers to double the data that could be gathered during that mission and reduce program risk.

James Garvin, the chief scientist at NASA headquarters in Washington, said the space agency's science program is undergoing a "rebalancing." He said the status of MSL is still under review, but also said he thinks the prospect for launching two MSL rovers "is long gone."

Garvin also said that maintaining progress with the Phoenix Mars lander, which is being readied for a planned 2007 launch, and MSL in either 2009 or 2011 "is essential if the rapid pace of scientific progress is to be continued."

That rapid pace also involves NASA's Mars Reconnaissance Orbiter, recently transported to Cape Canaveral, Fla., where it is being prepped for an August launch.

And in other Mars matters, NASA's Mars Telecommunications Orbiter is targeted for a 2009 launch slot. It is the first piece of communications infrastructure that will provide a link with Earth for all future Mars missions.

Lockheed Martin Space Systems in Denver has entered negotiations with NASA and the Jet Propulsion Laboratory to build the Mars Telecommunications Orbiter for a still-pending contract value, said Joan Underwood, a spokeswoman for the company.

The Mars Telecommunications Orbiter is scheduled to carry a science package still to be selected. It also will evaluate laser optical communications gear designed to speed the flow of data between Mars and Earth. In addition, NASA plans to demonstrate tracking, rendezvous and maneuvering with a football-sized canister that would be ejected from the main spacecraft - a test intended to help the agency hone future robotic Mars return sample procedures.

Newly appointed NASA chief Michael Griffin has accelerated the pace of all road mapping, Garvin said, with emphasis on the Crew Exploration Vehicle and lunar activities in the near term.

"The Mars road mapping has provided useful perspective, coming as it has after several years of communitywide strategic planning for robotic, discovery-responsive exploration of Mars," Garvin said.

The value of this Mars planning will come in the near term, Garvin said, as important decisions are made regarding the path ahead for the robotic Mars Exploration Program in the context of executing President George W. Bush's Moon, Mars and beyond vision for NASA.

"As such, there will necessarily be impacts on the Mars program," Garvin said. Given the criticality of maintaining Mars rover exploration at the surface while implementing a successful Mars Reconnaissance Orbiter, "there may be some consequences," he added, "but the full scope of those won't be fully analyzed until this summer."

The Spirit and Opportunity Mars rovers have yielded far more data than ever anticipated, Garvin said, particularly data that has helped scientists better understand the geochemical and mineralogical workings of Mars. Additionally, the two rovers have set the stage for the follow-on Mars Reconnaissance Orbiter scientific sweeps of the planet, and to target the Mars Science Laboratory in order for that large rover to analyze the best locales for the biogeochemical signatures of life, he said.

"In my view, the results of the Mars Exploration Rovers in the context of what the Mars Reconnaissance Orbiter discovers in its first months of exploration will have an influence on the early mission sequences of the next decade and on the pace of robotic exploration, including the timing of large, complex missions such as Mars Sample Return," Garvin said.

A more definitive timeline for Mars exploration is expected by July or August as NASA lays out its 2007 budget submittals, Garvin said. "So, my message right now is, 'Stay tuned.'"

The longevity of the Spirit and Opportunity rovers has been a surprise to most everybody, said William Farrand, a research scientist with the Space Science Institute here. He is a member of the Mars Exploration Rover science team.

While Spirit and Opportunity clearly have shown the utility of robots to carry out impressive science, Farrand said that people in the field are inherently more flexible than machines. Just flipping over a rock on Mars, for example, is not a task the rovers are capable of performing. "That's something a geologist can do in a second," he added.

Farrand said, however, that serendipitous discoveries have been made by the dual rovers. "Fate plays a role in that, like Opportunity finding an iron meteorite," he said.

While commanding the rovers from Earth to perform work is a tedious, painstaking process, Farrand said the rovers have been hugely successful in delving into the complexities of Mars. "I think we have created a whole new class of experts with this mission," Farrand suggested, "about how to do remote geology with robots."

Looking into the future, Farrand said that he sees a Mars exploration gap ahead - a point in time after the rovers have broken down and before the arrival of the next land rover, the Mars Science Laboratory. He said the red planet deserves an ongoing robotic presence and, ultimately, perhaps a human presence there akin to the full-time crew at the international space station.

One Mars research effort that remains on the drawing board is the sample return mission, Farrand said.

An amazing cadre of instruments were miniaturized and carried by Spirit and Opportunity, as will be the case for the upcoming Mars Science Laboratory. But there are things "you can't crunch down" to fit onboard a spacecraft, Farrand said. "There are tests you can do in the lab [here on Earth] that you can't do on rovers. A good Mars Sample Return mission would tell us a lot."

While the Spirit and Opportunity rovers have helped divine the story of water on Mars, much remains a puzzle.

"There's a whole host of things we don't understand about the distribution of water on Mars," said Bruce Jakosky, director of the Center for Astrobiology at the University of Colorado in Boulder. "I don't know what it all means, how to interpret it, whether it tells us that there was ground water or widespread lakes, or what? But something is going on here that's really interesting that we don't know how to unravel yet," he said.

From an operational standpoint, the twin Mars rovers have shown that mobility is central to harvesting a wealth of scientific results, Jakosky said. "You can do without. But I think you're really taking a scientific risk."

Jakosky pointed out that NASA doesn't have any Mars spacecraft on the books beyond the projected Mars Science Laboratory launch in 2009. "A lot of people know what we should do. And some of them even agree with each other. But we don't have a plan. We need one. We have the scientific information in hand to choose a plan," he said.

The issues are dollars and schedule, a commitment by NASA and whether all the money is going toward returning the shuttle to flight, Jakosky said. "I think the whole future of the science program is up in the air today," he said.