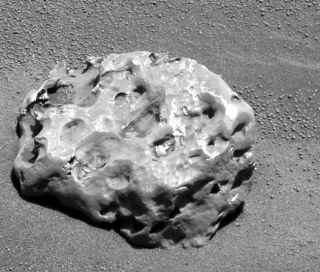 Opportunity Mars rover used its Panoramic Camera to take this up-close look at an intriguing rock – perhaps a meteorite sitting alone atop the landscape of Meridiani Planum. Image
(Image: © NASA/JPL/Cornell)

Scientists have confirmed that the Opportunity Mars rover has run across a meteorite, sitting within the robot's exploration zone at Meridiani Planum.

"We have definitive word now... it's a meteorite," Steve Squyres, principal science investigator for the Mars Exploration Rover program told SPACE.com. Squyres is based at Cornell University in Ithaca, New York.

Opportunity has been using both cameras and science gear to study the intriguing pitted rock on Mars, now dubbed "Heat Shield Rock".

Wheeling about the open landscape of Meridiani Planum, Opportunity had been busily inspecting heat-shield wreckage -- hardware leftovers from the spacecraft's plummet to Mars in January of last year.

Completing one of several debris surveys, the robot then turned and drove north toward Heat Shield Rock. The rover traversed about 33 feet (10 meters), parking itself at the desired standoff distance of about 3.3 feet (one meter) to acquire remote sensing of the rock.

Opportunity then acquired additional remote sensing, bumped forward closer to the rock, putting the odd object within the work volume of the tools mounted at the tip of the robot's mechanical arm.

Initial looks at the rock stirred considerable speculation that the object could be a meteorite - speculation now confirmed. Opportunity's Mini-Thermal Emission Spectrometer (Mini-TES) was suggestive that the find was metal in nature.

Last week, Squyres took a wait-and-see mode, eagerly awaiting tell-tale data recorded by Opportunity to be transmitted to Earth last weekend. The rover's M?ssbauer Spectrometer was moved into position over the suspect meteorite, to determine the composition and abundance of iron-bearing minerals.

Earlier last week, Laurie Leshin, Director of the Center for Meteorite Studies at Arizona State University in Tempe, Arizona was tempted by the images to conclude that the object was, indeed, a meteorite.

"Not sure if it is or not, but it does sorta look like one," Leshin told SPACE.com. "Looks a lot like an iron [meteorite] to me."

Given the robot's suite of science instruments, Leshin said the rover should be able to identify whether or not the rock was a meteorite.

The fact that Opportunity might have come across a meteorite raises a number of issues, Leshin hypothesized before the confirmation by Squyres and his science team.

"To me it is interesting for several speculative reasons," Leshin said. First of all, depending on the size, it may indicate that it fell during the time of a thicker atmosphere, she said.

"But we haven't done the calculation yet. Things much bigger than it appears to be wouldn't be slowed down by today's thin atmosphere [on Mars], and thus they would make a crater rather than a 'soft landing'", Leshin explained.

Leshin also conjectured about the shiny nature of the object. "Is it because...meteorites don't react with the atmosphere as on Earth or has it been sandblasted?" Lastly, iron metal is one of the most susceptible things to weathering/rust in the presence of water.

"Thus, a nicely preserved meteorite -- unless we're unlucky and it fell yesterday, which we would never know -- strongly supports the idea that current weathering rates [on Mars] are incredibly low," she said.