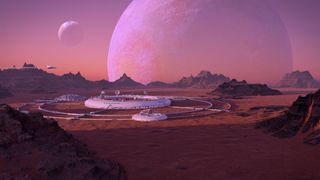 Here's the reality: We're messing up the Earth and any far-out ideas of colonizing another orb when we're done with our own are wishful thinking. That's according to Michel Mayor, an astrophysicist who was a co-recipient of the Nobel Prize in physics this year for discovering the first planet orbiting a sun-like star outside of our solar system.

"If we are talking about exoplanets, things should be clear: We will not migrate there," he told Agence France-Presse (AFP). He said he felt the need to "kill all the statements that say, 'OK, we will go to a livable planet if one day life is not possible on Earth.'"

All of the known exoplanets, or planets outside of our solar system, are too far away to feasibly travel to, he said. "Even in the very optimistic case of a livable planet that is not too far, say a few dozen light years, which is not a lot, it's in the neighbourhood, the time to go there is considerable," he added.

Mayor shared half of the Nobel Prize this year along with Didier Queloz for discovering the first exoplanet in October 1995. Using novel instruments at the Haute-Provence Observatory in southern France, they detected a gas giant similar to Jupiter, which they named 51 Pegasi b. (The other half of the prize was awarded to James Peebles of Princeton University for his work in dark matter and dark energy).

Since then, over 4,000 other exoplanets have been found in the Milky Way, but apparently, none of them can be feasibly reached.

Stephen Kane, a professor of planetary astrophysics at the University of California in Riverside, agrees with Mayor. "The sad reality is that, at this point in human history, all stars are effectively at a distance of infinity," Kane told Live Science. "We struggle very hard as a species to reach the Earth's moon."

We might be able to send people to Mars in the next 50 years, but "I would be very surprised if humanity made it to the orbit of Jupiter within the next few centuries," he said. Since the distance to the nearest star outside of our solar system is about 70,000 times greater than the distance to Jupiter, "all stars are effectively out of reach."

Well, you might say, plenty of things seemed out of reach until we reached them, such as sending aircraft on intercontinental flights. But "in this case, the required physics to reach the stars, if it exists, is not known to us and it would require a fundamental change in our understanding of the relationship between mass, acceleration and energy."

"So that's where we stand, firmly on the Earth, and unlikely to change for a very, very long time," he said.

Mayor told the AFP: "We must take care of our planet, it is very beautiful and still absolutely livable."

Andrew Fraknoi, emeritus chair of the astronomy department at Foothill College in California agreed that we won't be able to travel to these stars in the near future. But "I would never say we can never reach the stars and possible habitable planets," he said. "Who knows how our technology will evolve after another million years of evolution."