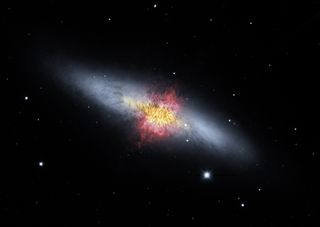 Hanging over the scruff of Ursa Major's neck some 12 million light-years from Earth, a cluster of young stars known as the Cigar Galaxy is puffing epic amounts of wind into deep space.

This intergalactic stogie isn't just blowing hot air. The Cigar Galaxy is a starburst galaxy, meaning new stars are born in its action-packed center remarkably quickly — at least 10 times faster than in the Milky Way, according to NASA. In order to grow, all those bright young fireballs eject gargantuan amounts of gas and dust into space, taking the form of an incredibly powerful galactic wind that could help transmit the building blocks of galaxies to distant parts of the universe. [Spaced Out! 101 Astronomy Images That Will Blow Your Mind]

In a study published Jan. 4 in The Astrophysical Journal Letters, NASA scientists weighed that wind to better understand how gas and dust — two ingredients for making newborn stars — enter into extragalactic space and influence the formation of new galaxies. Using an airborne infrared telescope, the astronomers counted pixels of dust in the faraway galaxy to estimate that roughly 50 million to 60 million suns' worth of mass were caught up in the Cigar Galaxy's mighty celestial wind.

That's a lot of gas and dust — and according to the new study, it was all aligned on the galaxy's magnetic field lines, which were also being dragged by the wind thousands of light-years into outer space. This marks the first observational evidence that massive galactic winds can actually pull a galaxy's magnetic field along with it, the researchers said.

"One of the main objectives of this research was to evaluate how efficiently the galactic wind can drag along the magnetic field," study co-author Enrique Lopez-Rodriguez, a Universities Space Research Association scientist, said in a statement. "We did not expect to find the magnetic field to be aligned with the wind over such a large area."

According to the researchers, these results suggest that the powerful winds gushing out of busy, star-forming centers like the Cigar Galaxy could be one of the chief mechanisms that spread stellar ingredients into undeveloped regions of space, along with a magnetic field to help shape them. Further study of the Cigar Galaxy — which is the closest starburst galaxy to Earth — could help astronomers understand the earliest galaxy formations at the start of the universe.