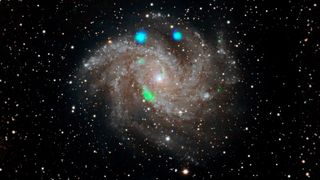 The Fireworks galaxy is known for its supernovas (seen in blue), but a mysterious X-ray explosion (green) has scientists scratching their heads.
(Image: © NASA/JPL-Caltech)

Don't be alarmed, but the Fireworks galaxy is exploding.

To be fair, it's been exploding for a while — at least since 1917 (give or take the 25 million years that light takes to travel from that galaxy to Earth), when astronomers first glimpsed a large star erupting into a supernova there. Since then, scientists have detected nearly a dozen stellar explosions in the busy galaxy, but none quite like the mysterious green blotch of X-ray light visible in the image above.

What makes that blotch special? For starters, it's not a supernova. The X-ray signature detected by NASA's Nuclear Spectroscopic Telescope Array (NuSTAR) observatory is far more energetic than that of a typical supernova. (You can see one of those explosions glowing blue in the upper right corner of the same image.) But more importantly, the energetic X-ray blast also appeared and disappeared from the galaxy in about 10 days — a much briefer appearance than a supernova, which can brighten and fade over hundreds of days.

So, the greenish blast of invisible energy is probably not a supernova. What is it, then? A study published Aug. 9 in The Astrophysical Journal provides a few guesses. The study authors, who glimpsed the mysterious blast of energy by chance while studying supernovas in the Fireworks galaxy, said the mystery explosion likely involves one of the most powerful objects in the universe, possibly a black hole or neutron star, tearing apart one of its stellar neighbors.

While black holes are, uh, black, their outer edges glow with intense radiation when nearby objects get pulled into the black hole's orbit. It's possible, according to a statement accompanying the study, that the source of the green blast is a black hole that devoured a nearby star. As the hole's overwhelming gravity rips that star to shreds, stellar debris could start spinning around the black hole. Debris closest to the hole's event horizon (see: point of no return) could orbit so quickly that it gets hundreds of times hotter than Earth's sun, radiating X-rays as it gets sucked into oblivion.

A neutron star, the ultradense corpse of a once-mighty star, could also be the culprit here. Packing roughly the same mass as our sun into a ball the size of a city, neutron stars exert a gravitational pull billions of times stronger than Earth’s. However, these stellar corpses spin so blazingly fast that it can be impossible for nearby debris to reach the object's surface, for the same reason that "jump[ing] onto a carousel that's spinning at thousands of miles per hour" would be a challenge, lead study author Hannah Earnshaw, a postdoctoral researcher at California Institute of Technology in Pasadena, said in the statement.

Sometimes, however, a wobble in a neutron star's magnetic field can slow the object's rotation enough for debris to get pulled into the star's glowing halo of destruction, a feature similar to what might swirl around a black hole. The pulling in of debris like this could result in the sudden appearance and disappearance of an X-ray blast, like what was seen here.

If that’s the case, another flash of radiation is likely to appear in the same spot again, following some future magnetic field wobble. Scientists will continue monitoring the Fireworks galaxy for possible repeat performances of this unusual X-ray event, waiting for another unlucky star to go out with a bang.