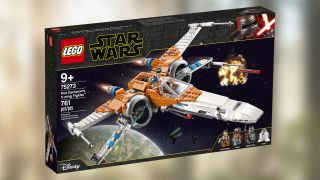 Lego is offering a free Death Star II Battle set for all Star Wars purchases above $75 for May the Fourth 2020. The deal ends May 4.

"Star Wars" fans all over the world will celebrate their fandom on May 4, also known as "Star Wars Day" (May the Fourth be with you) and Lego is here to celebrate.

Lego has been the entry point for so many of us to learn about a series, here are the sets Lego released — in part to celebrate the 2019 movie, "The Rise of Skywalker."

This May the Fourth, Lego has launched this new Ultimate Collector A-wing Starfighter and is offering a free Death Star II Battle set for Star Wars purchases over $75 through May 4, as well as double VIP points on Star Wars sets for its membership program.

Lego's new UCS A-wing Starfighter, which launched May 1, is a $199.99 set that allows "Star Wars" fans the chance to build an iconic Rebel ship from "Star Wars Episode VI: Return of the Jedi."

"The Mandalorian" on Disney Plus introduced us to a galaxy of new characters from the days after the Return of the Jedi, but every bounty hunter needs a ship. Behold: The Razor Crest dreadnought from Lego.

Lego's The Razor Crest | $129.99 (pre-order only)
The Razor Crest from Lego will ship out on Sept. 1, 2020. It includes minifigures of the Mandalorian, Greef Karga, a Scout Trooper and the Child (Baby Yoda), as well as the bounty hunter droid IG-11.

The Mandalorian & the Child (pre-order)

Lego's "The Mandalorian & the Child" Brickhead is an affordable $19.99, but only available for pre-order now (it will start shipping out on Aug. 1, 2020). It features a blocky Brickhead Mandalorian, complete with pulse rifle and blaster, and a Child in its floating pram.

The Mandalorian & the Child | $19.99 (pre-order only)
You'll be able to own your own Mandalorian and Child Brickheadz pair starting Aug. 1, 2020. The 295-piece set is available for pre-order now.

Let's face it, in the "Star Wars" universe, the bad guys had the greatest helmets.

To celebrate May the Fourth in 2020, Lego has three amazing new helmets for collectors to build and enjoy. They include Boba Fett's helmet, a Stormtrooper helmet and a TIE Fighter Pilot helmet.

Each of the three sets retails for $59.99, but vary in part count and design. While the Stormtrooper helmet is currently out of stock on Lego's site, you can find it at Target.com, Amazon and others.

Boba Fett Helmet | $59.99
Perhaps the most popular bounty in Star Wars lore, Boba Fett can grace your Mandalorian home in Lego form. You will have to assemble 625 pieces first, though. And watch out for Hutts.View Deal

Stormtrooper Helmet | $59.99
Luke Skywalker may have been a little short to be a Stormtrooper, but even he was too tall to don this Empire buckethead. This iconic Star Wars Lego helmet has 647 pieces.View Deal

It seems like every new "Star Wars" movie or TV show dreams up a new adorable droid and "The Rise of Skywalker" is no different. The film introduced us to the rolling one-wheeled robot D-O, which Lego released as a collector's series on April 19.

It's a perfect companion for Lego's previous droid set featuring BB-8, which is still available here for $99.99.

Lego D-O Droid | $69.99
Lego's D-O droid is the perfect companion for your brick-built BB-8. It includes 519 pieces and a tiny D-O droid for your minifigure-scaled Star Wars sets.View Deal

Relive the epic battles of Star Wars: The Rise of Skywalker (2019) with Poe Dameron's X-Wing Fighter ($89.99). You can adjust the wings to swoop in for an attack, shoot any enemies menacing your path, and make a safe landing after each mission using the landing gear. Included are 3 minifigures: Poe Dameron, a Knight of Ren (who supported Supreme Leader Kylo Ren) and Jannah (a former First Order Stormtrooper who now helps the Resistance). You'll also get the ever-handy R2-D2 robot. The set has 761 pieces and is recommended for anyone who is at least nine years old.

Lego Poe Dameron's X-wing Fighter | $89.99
Poe Dameron's new X-wing fighter is a glorious orange spaceship made up of 761 pieces to recreate the ship from "Star Wars: The Rise of Skywalker." View Deal

Aspiring pilots can fire the spring-loaded shooters, and use the docking tower for launches and landings. Included are 3 minifigures: a First Order TIE Pilot, a Knight of Ren and Finn (a former Stormtrooper). The set has 470 pieces and is recommended for anyone who is at least nine years old.

If you can cast your mind back to the groundbreaking first "Star Wars" film – "A New Hope" (1977), you'll remember the landspeeder that the young Luke Skywalker used to commute between his family farm and nearby services. Both Luke and his helper robot, C-3PO, are included as minifigures -- along with an armed Jawa, recalling an epic confrontation early in the film.

Lego's Luke Skywalker's Landspeeder set has been newly reissued with an opening trunk (just big enough to include macrobinoculars) and a blaster rifle for Luke. This $29.99 set has 236 pieces and is recommended for anyone at least seven years old.

For more "A New Hope" adventures, you can visit the hut of "Old Ben" – better known as the powerful Jedi knight, Obi-Wan Kenobi, with this $29.99 Lego Obi-Wan's Hut set. Fans of the movie will remember a famous scene with the hologram of Princess Leia, which you can recreate here using the minifigures.

Also included are Luke Skywalker, the robot R2-D2, and a Tusken Raider in case you have need of trying out the two lightsabers included with the set. This set has 200 pieces and is recommended for anyone at least seven years old.

Lego Obi-Wan's Hut | $29.99
Visit the old hermit Ben Kenobi (he hasn't heard the name Obi-Wan in a long time) in this 200-piece Lego set from the first "Star Wars" film. It includes minifugures of Obi-Wan Kenobi and Luke Skywalker, as well as C-3PO and R2-D2.View Deal

Zooming in time to the prequel movies, you can replay the epic battle between the new Sith Lord Darth Vader (formerly Anakin Skywalker) against Obi Wan. Fans of "Star Wars: Revenge of the Sith" (2005) will remember this as the duel on Mustufar.

In Lego's Duel on Mustafar set, you can recreate the scene using two minifigures (Anakin and Obi Wan), two lightsabers and a construction model that includes a "lava explosion" function. This set has 208 pieces and is recommended for anyone at least seven years old.

Lego's Duel on Mustafar | $19.99
Anakin Skywalker was supposed to bring balance to the Force, not leave it in darkness. Now you can recreate his fall to Dark Side in this 208-piece set with minifigures of Skywalker and Obi-Wan Kenobi.View Deal

Planet Hoth, with its frigid climate and dangerous Wampas, was a fun setting for adventures in "Star Wars: The Empire Strikes Back" (1980). Luckily, this Lego Snowspeeder can dodge just about any obstacle in its way. Included with this set are two minifigures — a Snowtrooper and Wedge Antilles (a Rebel pilot).

Also in the set are the Echo Base defense station and a speeder bike, complete with weapons. This set has 91 pieces and is recommended for anyone at least four years old.

Lego Snowspeeder | $19.99
Lego's 91-piece Snowspeeder for 2020 includes a speeder from "The Empire Strikes Back" along with Rebel hero Wedge Antilles and an Empire Snowtrooper and speeder bike. View Deal

Based on inspiration from "Star Wars: A New Hope" (1977), with this T-16 Skyhopper vs. Bantha Microfighters starship toy building set.

The included minifigures will help you simulate a battle on Tatooine, the home planet of the young Luke Skywalker as he discovers the greater galactic battle between good and evil. This set has 198 pieces and is recommended for anyone at least six years old.

The Mandalorian, Baby Yoda and more were popular topics for "Star Wars" fans after the launch of "The Mandalorian" on Disney Plus in 2019.

The series bridges a gap in the movie sequence between "The Last Jedi" (1983, from the original series) and "The Force Awakens" (2015, from the sequel series). This Lego Mandalorian Battle Pack set gives you four Mandalorian warrior minifigures to play with, along with a speeder bike and a defense fort. This set has 102 pieces and is recommended for anyone who is at least six years old.

Ready to make a First Order army just like what you saw in "Star Wars: The Rise of Skywalker" (2019)? This set should give you a boost.

The Sith Troopers Battle Pack includes a land speeder, a First Order Officer, a Sith Trooper and 2 Sith Jet Trooper minifigures complete with stud-shooting blasters. This set has 105 pieces and is recommended for anyone at least six years old.

Here's your big chance to ride along with Kylo Ren in his Shuttle Microfighter, as shown in "Star Wars: The Rise of Skywalker" (2019). You can take advantage of the foldable wings to take off, and make a safe landing with this $9.99 set.

Should you have any battles to fight along the way, two stud shooters should help you out. Included is a minifigure of Kylo Ren, and a lightsaber for any hand-to-hand combat. This set has 72 pieces and is recommended for anyone at least 6 years old.

Ride with the Resistance using this Y-wing Microfighter from "Star Wars: The Rise of Skywalker" (2019). This set has been re-released with a red-and-white color scheme, along with flick missiles and a rotating gun turret.

The included minifigure is none other than Zorri Bliss, who has remained neutral for most of the First Order vs. Resistance war. This set has 86 pieces and is recommended for anyone at least six years old.