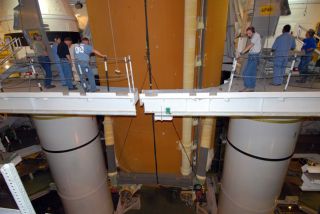 The external tank for space shuttle Atlantis is lowered between the solid rocket boosters for mating on the mobile launcher platform in preparations for the October 2008 launch to the Hubble Space Telescope.
(Image: © NASA/Jack Pfaller.)

This week,engineers at NASA centers in Florida and New Orleans hit major milestones intheir preparations for the early October launch of the space shuttle Atlantis towardHubble. NASA hopesto launch Atlantis on Oct. 5, three days earlier than planned, though afinal decision will be made during an Aug. 14 meeting of shuttle mission managers.

On Sunday,shuttle workers attached twin solid rocket boosters to Atlantis?s 15-storyexternal tank inside the cavernous Vehicle Assembly Building at NASA?s KennedySpace Center in Cape Canaveral, Fla. Two days later, engineers at the spaceportalso wrapped up flame trench repairs at Pad 39A, an Apollo-era launch site nowused for shuttle missions that was damaged during the May 31 liftoff of the Discoveryorbiter.

WhenDiscovery lifted off, the shuttle?s exhaust plume blasted some 3,500heat-resistant from their moorings inside Pad 39A?s flame trench, which guidesexhaust away from the spacecraft. Work crews patched up the damaged areas withFondue Fyre, a heat-resistant concrete that can be applied with a spray.

Meanwhile,the new instruments and equipment to fly to Hubble aboard Atlantis have been steadilyarriving at KSC for weeks, and a second space shuttle fuel tank is en route tothe spaceport from NASA?s Michoud Assembly Facility in New Orleans. That tank,which shipped out Wednesday by barge, is reserved for the shuttle Endeavour andits planned November mission to the International Space Station (ISS).

Engineersare also preparing Endeavour to serve as a rescue ship for Atlantis?s seven Hubbleservicing astronauts if their spacecraft suffers critical damage. Unlike recentshuttle missions, Atlantis?s crew will not be able to take refuge aboard the ISSif their shuttle is damaged by launch or orbital debris because the station andHubble are in different orbits.

Thomas saidprocessing for both space shuttles is going smoothly and Atlantis may roll outof its hangar to meet its rocket boosters and fuel tank, then out to the launchpad, a few days early. The shuttle is due to leave its hangar on Aug. 22, thenhead to Pad 39A on Aug. 29, but those dates could change next week if NASA?searlier Oct. 5 launch target holds.

?Therehaven?t been any major problems,? Thomas said of spacecraft preparations.

Atlantis?sSTS-125 flight to the Hubble Space Telescope will mark the fifth and finalservicing mission to the orbital observatory since its launch in April1990. The mission will also be NASA?s fourth of five planned shuttle flightsfor 2008 and the last not aimed at completing the construction of theInternational Space Station.