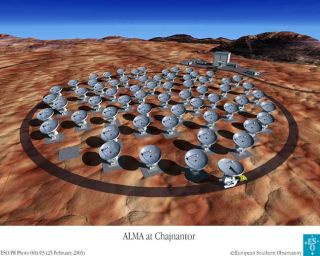 An artist's view of the completed Atacama Large Millimeter Array (ALMA) in Chile's Atacama Desert. Here, the array is arranged in a compact configuration.
(Image: © ALMA)

Astronomers celebrated on Friday the formal acceptance of the first North American antenna by the Joint ALMA Observatory in Chile.

The new observation tool will consist of an array of 40-foot (12-meter) radio telescopes, 64 in all, each linked together to make up the world's largest radio telescope to observe at millimeter and submillimeter wavelengths. Emissions at these levels have wavelengths longer than infrared, but shorter than radio waves and aren't visible by the naked eye.

ALMA, the Atacama Large Millimeter/submillimeter Array is being assembled high in the Chilean Andes by a global partnership.

With ALMA, astronomers will study the universe, the molecular gas and tiny dust grains from which stars, planetary systems, galaxies and even life are formed. ALMA will provide new insights into the formation of stars and planets and will reveal distant galaxies in the early universe, which we will see as they were over 10 billion years ago.

The acceptance comes just weeks after the first ALMA antenna--produced under the direction of the National Astronomical Observatory of Japan on behalf of ALMA's East Asian partners--was handed over to the observatory.

"These ALMA antennas are technological marvels," said ALMA Director Thijs de Graauw. "They are more precise and more capable than any ever made. Their performance in the harsh winds and temperatures of our high-altitude site bodes well for the observatory's future."

A single 12-meter antenna's dish is bigger than the largest optical telescope's reflective mirror, but to match the sharpness achieved by an optical telescope, a millimeter-wavelength dish would have to be impossibly large, miles across. ALMA will combine signals from dozens of antennas spread across miles of desert to synthesize the effective sharpness of such a single, gigantic antenna. The process, called "interferometry," involves analysis of the ways in which the signals coming from each antenna interfere with one another.

"This is a major milestone for the ALMA project," explained Philip Puxley, NSF's ALMA program manager. "With two antennas now on site, we begin the real work of combining signals from them. We are advancing toward ALMA's ultimate goal of surpassing by tenfold existing technology in this area for sharper resolution, sensitivity and image quality."

ALMA officials expect the pace of antenna acceptance to accelerate. "We have nine North American antennas on site already," said Adrian Russell, NRAO's ALMA project director. "Following handover of Number Three, we plan to get one through the test procedure each month. Additional North American antennas will be arriving in Chile at a rate of one every two months, and General Dynamics is on track to complete delivery of these systems within days of the original schedule."

The antennas, which each weigh about 100 tons, can be moved to different positions in order to reconfigure the ALMA telescope. This repositioning will be carried out by two custom-designed transporters, each of which is some 33 feet wide, 66 feet long, and has 28 wheels.

When completed early this decade, ALMA will have a total of 66 antennas, with an option for further expansion, provided by partners in North America, Europe and East Asia. The first European antennas, produced under the auspices of the European Organization for Astronomical Research in the Southern Hemisphere are scheduled to begin arriving early this year.