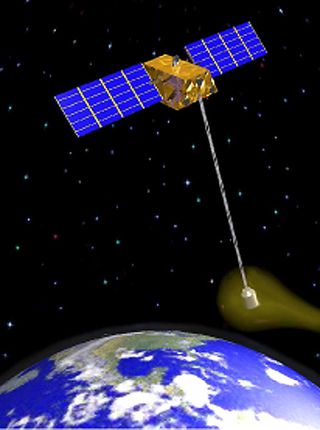 What a drag The Terminator Tether let's gravity do all the work, basically pulling the satellites back to earth.
(Image: © TUI)

It has been suggested that every satellite deployed should carry extra propellant so the satellite can boost itself up to a higher "graveyard" orbit. Unfortunately, not only must the extra kilograms of propellant be boosted up from Earth, the rocket and guidance systems must be usable for many years after launch. Also, graveyard orbits merely leave satellites up higher, where micrometeorite damage slowly causes these objects to break apart; smaller fragments will filter back down, leaving this problem for our children to solve. These smaller fragments are almost impossible to clean up.

Extra propellant could also bring the satellite down; of course, this also requires that the rocket and guidance systems work at the end of the satellite's life. If either system fails to work, the satellite stays right where it is.

It would be more practical (as well as more responsible) to solve this problem at the start.

Here's how it works:

The Terminator Tether is bolted onto the satellite during construction. Once launched and operational, the device is dormant, waking up periodically to check the status of the satellite and to listen for activation commands. When the command to deorbit the spacecraft is given, the 5 kilometer cable is deployed. The cable interacts with ionospheric plasma and the Earth's magnetic field; this produces a current along the tether which causes a net drag on the spacecraft, lowering its orbit until it burns up in the Earth's atmosphere. (To find out about the forces that electrodynamic tethers bring to bear on spacecraft, read Electrodynamic Tethers - Bring Down Debris or Boost Spacecraft and Non-conductive Tethers - Artificial Gravity in Orbit.)