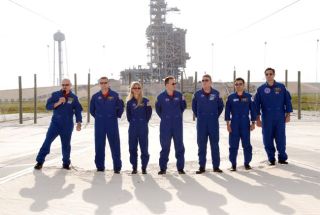 NASA's shuttle Discovery is on track to ferry seven astronauts and a large Japanese laboratory to the International Space Station (ISS) later this month.

?From whatI was told yesterday, the condition of the orbiter and the number of problemswe?ve had with it have been at a historic low,? Kelly said from Discovery?s seasidePad 39A launch site. ?So that makes us feel really good.?

Kelly andhis STS-124 astronaut crew are in the final weeks of preparation for theirplanned 13-day mission to the ISS, where they will deliver Japan?s massive37-foot (11-meter) Kibo laboratory during three spacewalks.

The astronautsare currently at NASA?s Florida spaceport for a three-day training session to practicelaunchand escape procedures, as well as practice donning their bright orangepressure suits for liftoff and landing. They will stage a dress rehearsal of theirfinal hours before launch on Friday and cap the training simulation with anemergency escape drill.

?We?ve gota little bit of training and a little bit of practice to go,? Discovery missionspecialist Mike Fossum said this week. ?We?ll be ready to take off in a fewweeks.?

Accordingto the United Space Alliance, NASA?s shuttle contractor, engineers have tackledonly 40 glitches with Discovery - the fewest ever in the entire 27-year history ofshuttle flight - in their bid to ready the orbiter for its late May liftoff. The second-lowest number of issues - 76 in all - occurredin April 2001 as engineers were again preparing Discovery for flight, USAofficials said.

"Thereason the shuttle has fewer maintenance issues is a lot of hard work thathas gone into making the hardware, processes, and software better along with alittle bit of luck,? said Mark Nappi, USA?s program manager for groundoperations, in a statement. ?We are seeing it across the board on all processing.?

Discovery?sSTS-124 mission will mark NASA?s third shuttle flight of the year dedicated to hauling a new orbital room to the high-flying spacestation. The shuttle Atlantis delivered Europe?sColumbus laboratory to the station in February and was followed by theEndeavour orbiter carrying an attic-likestorage room for Japan?s Kibo lab.

NASA now hopesto launch a total of five shuttle flights this year, which include four stationconstruction flights and a servicing mission to the Hubble Space Telescope. A plannedsixth flight, slated for flight in December, has been pushed to early 2009 dueto fuel tank delivery delays, mission managers have said.