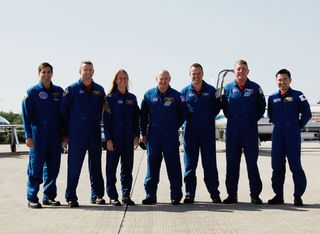 The sevenshuttle astronauts preparing to rocket toward the International Space Station(ISS) with a new Japanese laboratory this month arrived at NASA?s Floridaspaceport Tuesday for launch day practice.

Commandedby veteran NASA astronaut Mark Kelly, the astronauts are gearing up for a plannedMay 31 launch aboard the space shuttle Discovery to deliver Japan?s tourbus-sized Kibo module, the largest room built for the station.

?Discoverylooks really good from what we can see,? Kelly said after flying over theshuttle?s seaside launch pad at NASA?s Kennedy Space Center (KSC) in CapeCanaveral, Fla. ?It?s great to see the vehicle at the pad.?

NASA hauledDiscovery to its Pad 39A launch site at KSC early Saturday as engineers preparethe spacecraft for a 13-day mission to the space station.

Kelly andhis crewmates arrived at the launch site today by 4:12 p.m. EDT (2012 GMT),swooping down in NASA?s T-38 jets for a traditional three-day training exercisethat precedes every shuttle mission. The session is dubbed the TerminalCountdown Demonstration Test.

?We justneed to have this same weather when we launch on the 31st of May,? Garan saidfrom the sunny tarmac.

Over thenext few days, the astronauts will try on their bright orange launch and entrypressure suits, inspect the 37-foot-long (11-meter) Kibo module insideDiscovery?s cargo hold and speak with reporters from their Pad 39A beforecapping the trip with a launch day dress rehearsal and emergencyescape drill.

?I?mlooking forward to seeing the Kibo module in the payload bay,? Hoshide toldreporters.

Discovery?sSTS-124 mission will mark NASA?s third shuttle flight of the year dedicated tohauling a new room to the space station, with Kibo?s main module following a smallerstorage room and Europe?s newColumbus lab. Five of the shuttle?s seven astronauts are making the firstspaceflight of their careers with the mission.

?As wewere flying over here, I?m looking at the two [launch] pads and I don?t knowwhich one the orbiter?s on,? joked Ham, a U.S. Navy commander who chalked it upto his rookie status, though the word ?rookie? has been off limits duringtraining. ?So I flew right between them until I found it.?

?I have to admit that I did the same thing,? said Garan, who is also making hisfirst spaceflight, with a smile. ?But we found it.?