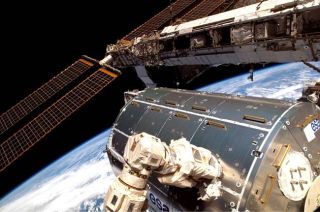 The European Space Agency's Columbus lab is photographed by an astronaut inside the International Space Station during NASA's STS-122 mission to the orbital outpost.
(Image: © ESA/NASA.)

HOUSTON — Astronauts aboard the International Space Station (ISS) are forging ahead with the activation of the orbiting laboratory's new European research module.

The joint 10-astronaut crew of the space station and NASA's docked Atlantis orbiter are squeezing in extra work today commission the European Columbus lab before the shuttle departs the ISS on Monday.

"We're very far advanced in the activation and commission of Columbus," said Alan Thirkettle, station program manager for the European Space Agency (ESA), which built Columbus as its largest contribution to the ISS project.

Commanded by veteran spaceflyer Stephen Frick, Atlantis' STS-122 crew is in the middle of a 13-day mission to deliver Columbus and a new station crewmember to the ISS. The astronauts will discuss their spaceflight with reporters at 8:40 a.m. EST (1340 GMT).

"We're really a real partner now and we feel it, and it's a very nice feeling indeed," Thirkettle said. "We're a really happy set of bunnies."

Thirkettle said ESA astronauts Hans Schlegel, of Germany, Leopold Eyharts of France and their crewmates are well ahead of schedule in activating the 1.4 billion ($2 billion) research lab's science racks.

"They, along with the rest of the crew, are working at a rate that far exceeds the planning expectations," Thirkettle said of Schlegel and Eyharts. "It's been a real challenge for the ground segment, the Columbus control center in particular, to keep them occupied and to keep up with them."

Spacewalkers installed two of the planned four external research platforms to porch-like carriers on the outboard edge of Columbus on Friday, with flight controllers on Earth powering them later that night.

Columbus' ESA control center sits just outside Munich, Germany, where a team of 100 flight controllers work in three shifts to monitor the 23-foot (7-meter) long module around the clock. Eyharts, who has replaced NASA astronaut Dan Tani as a member of the stations' Expedition 16 crew, will oversee Columbus' activation in orbit.

Thirkettle said that, if all continues to go well, Columbus' Biolab experiment facility should be activated enough to begin initial plant growth experiments, the first results of which are due to return to Earth next month aboard NASA's next shuttle mission.

"We also really appreciate having the new module on board and are very excited about getting Columbus fully activated and running, and doing science on board," NASA astronaut Peggy Whitson, commander of the station's Expedition 16 mission, told ESA officials this week. "We're looking forward to that time."

NASA's Mission Control here at the Johnson Space Center roused the Atlantis crew with the song "I Believe I Can Fly" performed by Yolanda Adams and Kenny G, a tune selected for STS-122 mission specialist Leland Melvin.

"Thank you so much," Melvin said as he thanked his family for choosing the song. "I believe we are flying 17,500 miles per hour above this beautiful planet and we are putting together this International Space Station for the betterment of humankind."

Atlantis' STS-122 crew is scheduled to undock from the space station on Monday for a planned Feb. 20 landing at NASA's Kennedy Space Center in Cape Canaveral, Fla.

Mission managers said late Friday that a backup landing site will also be called up at California's Edwards Air Force Base to give the shuttle more opportunities to land and clear the way for a U.S. missile launch to destroy a failing spy satellite filled with toxic rocket fuel.