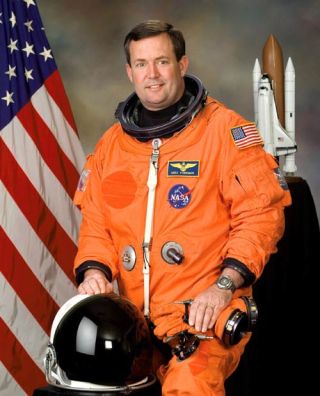 EXPERIENCE: Foreman was designated a Naval Aviator in January 1981 and assigned to Patrol Squadron Twenty-Three at NAS Brunswick, Maine. He made deployments to Rota, Spain; Lajes, Azores; Bermuda and Panama. Following this tour he attended the U.S. Naval Postgraduate School in Monterey, California where he earned a Master of Science degree in Aeronautical Engineering in 1986. As a graduate student, Foreman conducted thesis research at the NASA Ames Research Center in Mountainview, California. Following graduation he was assigned as the Assistant Air Operations Officer in USS CORAL SEA (CV-43) homeported in Norfolk, Virginia. In addition to his Air Operations duties, he flew as an E-2 pilot with VAW-120 and VAW-127. Upon selection to the U.S. Naval Test Pilot School (USNTPS) in 1989 he moved to NAS Patuxent River, Maryland. He graduated from USNTPS in June 1990 and was assigned to the Force Warfare Aircraft Test Directorate. In 1991 he was reassigned as a flight instructor and the Operations Officer at USNTPS. During his tenure there he instructed in the F-18, P-3, T-2, T-38, U-21, U-6 and X-26 glider. In 1993, Foreman was assigned to the Naval Air Systems Command in Crystal City, Virginia, first as the deputy, and then as the Class Desk (Chief Engineer) Officer for the T-45 Goshawk aircraft program. Following that tour he returned to NAS Patuxent River, this time as the Military Director for the Research and Engineering Group of the Naval Air Warfare Center Aircraft Division. In addition to his duties at Patuxent River, he was assigned as the Navy liaison to NASA’s Advanced Orbiter Cockpit Project at the Johnson Space Center. Foreman was working as the technical lead for the Advanced Orbiter Cockpit Project team when he was selected for the astronaut program.

He has logged over 5,000 hours in more than 50 different aircraft.

NASA EXPERIENCE: Selected by NASA in June 1998, he reported for training in August 1998. Astronaut Candidate Training included orientation briefings and tours, numerous scientific and technical briefings, intensive instruction in Shuttle and International Space Station systems, physiological training and ground school to prepare for T-38 flight training, as well as learning water and wilderness survival techniques. He was initially assigned technical duties in the Astronaut Office Space Station Branch where he represented the Astronaut Office on training issues. He was then assigned to the Space Shuttle Branch as a liaison between the Johnson Space Center and the Kennedy Space Center, and also served as the Deputy, Space Shuttle Branch. Foreman is assigned to the STS-123 mission that will deliver the Japanese Logistics Module and the Canadian Special Purpose Dexterous Manipulator to the International Space Station.