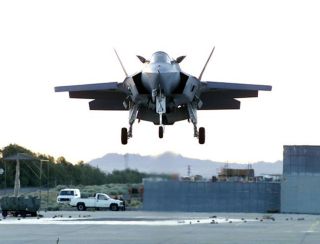 In 2001, Lockheed Martin's X-35B Concept Development Aircraft perormed a short-distance take-off, accelerated to supersonic speed in level flight and landed vertically, all in one flight. By doing so, and by passing other tests, the X-35B won Lockheed Martin the prime contractor for the Pentagon's Joint Strike Fighter requirement, the three-member aircraft family that will be the F-35A, F-35B and F-35C Lightning II.
(Image: © Lockheed Martin)

Lockheed Martin knows the F-35B will be able to do all this even before the aircraft flies for the first time in May 2008. The X-35B Concept Development Aircraft (CDA) that the company built to win the Pentagon's Joint Strike Fighter (JSF) competition provided the proof, in 2001.

No other aircraft has ever achieved level supersonic flight and landed vertically, and so the X-35B and its descendant the F-35B will hold a unique place in history.

The F-35B's astonishing capabilities — to be put to use by the U.S. Marine Corps, and the air forces and navies of the UK and Italy — rely on the very-high-tech propulsion system that Lockheed Martin's engine partners developed for the CDA and its offspring.

Marrying Rolls-Royce's unparalleled short/vertical take-off and vertical landing (STOVL) know-how -- won in developing the Harrier jump-jet — with the most powerful fighter jet engine in history, the F135 developed by Pratt & Whitney for the X-35 and F-35 family, the F-35B's propulsion system is notable in all sorts of ways.

For supersonic flight and fast acceleration, the F135 (and the F136 to come as an alternative F-35 engine from General Electric in 2010) develops an unprecedented 40,000 pounds of rearward-directed thrust using afterburner.

But, for hovering, the F-35B can rely on 40,000 pounds of thrust without having to use reheat. The F135's full-authority digital engine control (FADEC) software runs the engine at a higher temperature for hover flight than it does during conventional flight, producing more "dry" thrust than the engine normally develops without activating its afterburner.

When the F-35B is hovering, all 40,000 pounds of thrust is directed downwards, not backwards. It also can be directed anywhere in between, and even slightly forwards, said Tennant.

How the F-35B achieves all this involves a complex fusion of software, precision engineering and materials technology. The F135 is designed to be completely interchangeable with any other F135 or F136 in any of the three versions of the F-35 Lightning II, two of which won't land vertically. However, in the STOVL F-35B, the engine's design also allows for a forward-leading shaft to be coupled to the spool driven by the F135's low-pressure turbine.

This spool drives the main fan that pulls air into the engine to allow combustion to take place. But when the spool is coupled (near the main fan) to the shaft, the spool/shaft arrangement also drives a two-stage, vertically mounted "lift fan" situated just behind the pilot's cockpit.

In hover mode, the F135's low-pressure spool imparts 28,000 shaft horsepower to the shaft, said Tennant. This is then converted to vertical thrust in a 90-degree gearbox located behind the cockpit. In this gearbox, a clutch engages a horizontally mounted pinion gear on the shaft to drive two vertically mounted bevel gears, one above and one below the pinion gear.

The two bevel gears rotate in opposite directions, each gear driving a short vertical shaft. These shafts power the two counter-rotating fan stages of the lift fan, Tennant explained. Doors in the fuselage above the lift fan open to provide an auxiliary air inlet and the fan forces air downwards to produce 20,000 pounds of vertical thrust. The air exits through a "variable area vane box nozzle" (VAVN) situated in the bottom of the fuselage directly underneath the lift fan.

"It allows us to control (vertical) thrust — magnitude and direction," said Tennant. The VAVN "looks like a set of Venetian blinds. When it's somewhat closed, thrust can point somewhat aft to somewhat forward, or straight down."

Pitch and roll control while hovering

The swivel duct is composed of several attached, overlapping pieces that swivel at angles to each other with the aid of ball bearings. It can direct the engine's exhaust air anywhere in a 105-degree continuous range from straight back through directly down to slightly forward, said Tennant. Pointed downwards, the duct looks like a stubby elephant's trunk.

When hovering, the F-35B also relies on two "roll post ducts," downward-pointing nozzles located in the root of each wing.

The F135 is a low-bypass turbofan engine: Some of the air pulled in by the fan at the front doesn't go into the engine core to be mixed with fuel and burned, but bypasses it to flow outside the casing.

During hover, some bypass air is directed into the roll post ducts to give the F-35B roll control stability while performing a vertical take-off or landing. (Although the F-35B needs a short take-off run when fully loaded, it produces enough vertical thrust to take off vertically when lightly loaded.)

FADEC software varies the thrust through each roll post duct independently to ensure the pilot has complete roll control over the aircraft while hovering, said Tennant.

In its F-35B partnerships, Rolls-Royce is responsible for the lift fan and its associated drive shafts, gearbox and clutch, as well as the swivel duct and the roll post ducts. In the F135-equipped F-35B, Pratt & Whitney provides the engine itself, its stealth-optimized exhaust nozzle and, most importantly, the FADEC software.

Uniquely, the F-35 features not one but four FADEC systems -- two for the main engine, to ensure complete redundancy of operation, and, likewise, two for the lift-fan system.

"The software is a big piece of the technology that makes the STOVL work," said Tennant.

The FADEC software is so complex that it runs through a high-speed databus that P&W developed specifically for the F-35's propulsion system. This databus is linked by means of a firewire-like system to the high-speed databus developed by Lockheed Martin to control the aircraft's other systems.