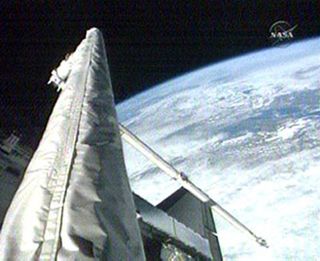 The space shuttle Discovery's robotic arm with the attached boom extension is moved into position shortly after completion of the heat shield inspection on Oct. 24, 2007. Discovery's STS-120 crew launched toward the ISS a day earlier.
(Image: © NASA.)

HOUSTON -An early look at imagery of NASA?s space shuttle Discovery and its discarded fueltank has found the orbiter?s heat shield to be in good shape one day afterlaunch, mission managers said Wednesday.

?Thepreliminary indication is that there is nothing that anyone is concerned aboutat all,? said John Shannon, head of Discovery?s STS-120 mission management team.

Shannon said a complete analysis of the heatshield inspection should be completed by week?s end, when it can be combinedwith high-resolution images of Discovery?s belly-mounted tiles that will be taken byastronauts aboard the International Space Station (ISS). Shuttle commanderPamela Melroy will guide Discovery through an orbital flip before docking atthe ISS early Thursday to allow the station?s Expedition 16 crew to photographthe shuttle?s undercarriage.

An earlyanalysis of Discovery?s fuel tank found that some modifications designed tolimit foam loss appeared to be a success, Shannon said, adding that about sixpieces of debris seen in launch video occurred too late to pose any risk to theshuttle.

NASA hascontinually worked to limit the amount of foam debris during shuttle launchesafter a piece damaged the Columbia orbiter?s heat shield in 2003, leading tothe loss of the spacecraft and its crew during landing.

Before the shuttle?slaunch, an independent NASA engineering group recommended that the agency replacethree of the panels after finding possible defects in their exterior coating. Missionmanagers, however, found Discovery fit to fly and believe that any significant degradationin the panels would turn up in the data gathered from today?s inspection.

Discovery?sSTS-120 crew will delivera new orbital room dubbed Harmony during a planned 14-day missionto the ISS. Once completely installed, the Italian-built Harmony module willserve as the docking port for European and Japanese laboratories. During theirmission, shuttle astronauts also plan to relocate a massive solar array segmentand swap out one member of the station?s Expedition 16 crew.

?It?swonderful to be back in space again and I?m looking forward to getting back tothe ISS tomorrow,? said Discovery mission specialist Scott Parazynski, who is making hisfifth spaceflight on the STS-120 mission. ?It should be a really great day.?