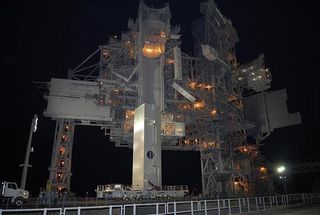 The payload transporter arrives with its canister on Launch Pad 39A in preparations for shuttle Endeavor's Aug. 7th launch.
(Image: © NASA)

HOUSTON ?NASA?s shuttle Endeavour is headed for the launch pad as the space agency gearsup for its second construction flight of the year to the International SpaceStation (ISS).

?We didn?tmake this morning?s 4:00 a.m. cutoff, but we are all set to go tonight,? said deputy shuttle program manager KimDoering, adding that the threat of lightning was to blame for the delay.

SinceEndeavour last flew in 2002, NASA technicians have replaced 2,500 of its heat-resistanttiles, installed thicker windows and added extra protection to the orbiter?sthermal blankets?among other upgrades?following the inadvertent loosening ofone during the STS-117 crew?s recent mission aboard Atlantis.

?We?re really excited to have Endeavourfly again,? Doering said in a Tuesday briefing.

The STS-118shuttle mission is slated to last 11 days, but could be extended three extradays pending on the success of a new system to transfer power from the ISS tothe orbiter.

Morgan willfunction as a fully trained mission specialist but will also interact withstudents and answer their questions while orbiting 220 miles (354 km) above theEarth.

Theastronauts will attach the S5 starboard truss, a piece essential to connectinga future solar array to the ISS, as well a spare parts platform. They?ll alsoreplace a faultycontrol moment gyroscope (CMG) that helps NASA control the station?sposition in orbit.

Doeringnoted the crew could squeeze in extra work in preparation for the next shuttlemission, pending on whether or not a new power-sharing system called the station-shuttlepower transfer system (SSPTS) works. Added during Endeavour?slengthy overhaul, the system will allow a shuttle crew to squeeze in extraflight time by borrowing some of the station?s solar power and conservingEndeavour?s fuel cells.

NASAofficials explained that busy astronaut schedules should be expected over thenext three years to complete ISS construction work prior to the three-shuttle fleet?sretirement in September 2010.

?We?re readyto fly 118, and a lot of people have said ?boy, that?s quick,?? Doering said. ?Theteam has demonstrated that they can turn these vehicles around quickly. This isabout the pace we?ll be on?we?ll be flying roughly every other month.?