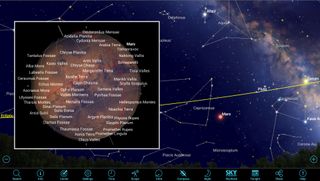 2018 will be the year of Mars! The Red Planet will encounter deep sky objects and planets in the night sky, and it will approach close enough to Earth this summer that you will be able to see Mars' southern polar cap and largescale features on the surface — even using a backyard telescope. The planet feature labels option in SkySafari 5 Plus and other mobile astronomy apps will help you identify what you are seeing.
(Image: © SkySafari App )

Last year's big astronomy story was the Great American Total Solar Eclipse, which crossed the U.S. from coast to coast back in August. But for 2018 — it's Mars! This year, the Red Planet will shine brighter and show more details in a backyard telescope than it has since 2003.

There are plenty of other must-see Mars events that you should add to your calendar for the coming year, as well. A mobile astronomy app can show you what to expect, tell you more about the events and help you plan to see them for yourself.

In this edition of Mobile Astronomy, we'll tell you how to find Mars throughout the year and indicate the best nights to look at the planet through your binoculars or backyard telescope. We'll also highlight some photogenic pairings of the Red Planet with other celestial objects. [The Top Skywatching Events to Look for in 2018]

The year to observe Mars

Earth is closer to the sun than Mars is, and so our planet orbits about twice as fast as our further-out neighbor. Every 780 days (2 years and 50 days) or so, the Earth passes Mars on the "inside track," bringing the two planets closer together than they are otherwise.

Because both planets have elliptical orbits, some of these encounters are closer than others. In the summer of 2018, Mars will be closer to Earth than at any time since 2003. The Red Planet won't be this close again until 2035, so dust off your telescope and get ready to see Mars in incredible detail!

The close Earth-Mars encounters are called "oppositions," because Mars is opposite the sun in Earth's sky at those times. At opposition, the Red Planet will rise as the sun sets, making Mars an all-night target for skywatchers.

Below, we'll discuss where to find Mars during 2018, along with some of its more interesting encounters with other planets and celestial objects. By setting a skywatching app to the corresponding dates and times, you can preview the sky to help you locate these events using telescopes or binoculars, or just looking with unaided eyes.

As the year opens, reddish Mars is a distant and dim magnitude +1.5 (lower magnitude values indicate greater brightness) object in the predawn sky in Libra. The planet will pass very close to bright Jupiter on the mornings of Jan. 6 and 7 — so close that both planets will appear together in the field of view of a backyard telescope at low magnification. On Jan. 31, Mars will move into Scorpius, and then Ophiuchus, passing above its stellar twin, Antares, during the mornings around Feb. 11.

Antares means "Rival of Mars," and the star is called that because of its visual similarity to the planet and because Mars passes near the star from time to time.

On March 12, Mars will enter Sagittarius and the heart of the Milky Way, setting up several close encounters with deep-sky objects. On the morning of March 19, in a dark moonless sky, Mars will pass directly between the Trifid and Lagoon nebulas. A larger-aperture telescope should allow you to see the nebulas above and below the planet. This event will also make a lovely long-exposure photograph through a tracking telescope.

On April 2, Mars will pass only 22 arc-minutes (about two-thirds of a full moon diameter) above the globular cluster Messier 22, with Saturn sitting about a finger's width above them. On May 14, Mars will pass only 18 arc-minutes below another globular cluster, Messier 75, while transitioning into Capricornus. Mars (located only 6 light-minutes from Earth) and the cluster (situated a whopping 68,000 light-years from us) will both appear together in a small telescope's eyepiece.

During the first half of 2018, Earth will slowly catch up to Mars. The Red Planet will noticeably brighten in the sky each month during the first half of the year, and a telescope will show Mars' visible disk increasing about fivefold in diameter during that time!" Mars will officially enter the evening sky after mid-June, when the planet will begin to rise before midnight. But the best sights will still be yet to come.

Mars will continue to brighten and grow in size as we approach opposition night on July 27. At opposition, Mars' disk will be 24.3 arc-seconds across (or two-thirds the size of Jupiter’s disk) and shine with a visual magnitude of -2.8. Closest approach to Earth occurs a few days later on July 31. On that night, Earth will be within 0.385 astronomical units (1 AU is the mean sun-Earth distance), or 35,785,537 miles (57,590,630 kilometers), of Mars.

Radio signals will take only about 3 minutes to reach the Red Planet. This is why Mars exploration missions are timed to launch from Earth during oppositions (about every other year). [Missions to Mars: A Robot Red Planet Invasion History (Infographic)]

At opposition, on a night with clear, steady air, even with a small telescope you should be able to see Mars' polar cap of frozen carbon dioxide and water ice, along with darker and lighter regions on the planet.

And there is no need to wait until July 31 to observe Mars. The planet will look spectacular for weeks on either side of that date. In fact, because Mars' rotational period is about 38 minutes longer than Earth's, by viewing the planet over many nights, you can see different parts of its surface. It would take you 41 nights of observing to see the entire globe of Mars. Because there are about 7 hours of dark skies per night in late July, you could also observe Mars from about 10 p.m. in your local time zone, soon after the planet rises, until 4:30 a.m., just before it sets, and see about one-quarter of the globe in a single night.

If your astronomy app includes surface labels for the planets, use them to identify the areas you are observing and zoom in with the app to see features in more detail. (Remember that most telescopes invert or flip the view. The SkySafari 5 app for iOS and Android includes an option to flip the display to match your telescope. Tap the upper right corner of the display to open the flipping controls.)

Owners of telescopes with apertures of 8 inches (200 millimeters) and larger should try to discern additional surface details on Mars and look for its two small moons, Phobos and Deimos. Because the planet outshines the moons by a wide margin, it helps to position Mars just outside your eyepiece's field of view. Your app will tell you where to look for the moons with respect to the planet. Don't forget to account for any image flipping.

Mars will be well worth observing telescopically during July, but the planet will climb to only about 20 degrees above the southern horizon when it crosses the meridian at about 1 a.m. local time. Fortunately, as sunsets occur earlier in late summer and early autumn, we will be able to view the planet higher in the evening sky. [When, Where and How to See the Planets in the 2018 Night Sky]

In mid-November, Mars will move into Aquarius, steadily shrinking and dimming as Earth pulls away from the Red Planet after opposition.

The year will close with a special telescopic treat: On the evenings of Dec. 6 and 7, red Mars will have a very close encounter with blue Neptune. Separated by only about 20 arc-minutes, the two planets will easily fit together in your telescope's field of view, exhibiting beautiful contrasting colors! Observers in Asia and Australia will get to see the two planets only 2 arc-minutes apart.

As 2018 comes to an end, Mars will cross into Pisces as a now-dimmer magnitude +0.4 object that exhibits a small 7.5-arc-second disk. After hiding near the sun during most of 2019, Mars will return for another good opposition in late 2020. But it'll be a long time before we see another "Martian Year" as good as 2018. Get ready!

In the next edition of Mobile Astronomy, we'll preview January's Blue Blood supermoon total eclipse and some 2018 opportunities to see Mercury, the round black shadows of Jupiter's moons and the eclipse of a bright star by Earth's moon. Until then, keep looking up!

Editor's note:Chris Vaughan is an astronomy public outreach and education specialist at AstroGeo, a member of the Royal Astronomical Society of Canada, and an operator of the historic 74-inch (1.88 meters) David Dunlap Observatory telescope. You can reach him via email, and follow him on Twitter @astrogeoguy, as well as on Facebook and Tumblr.