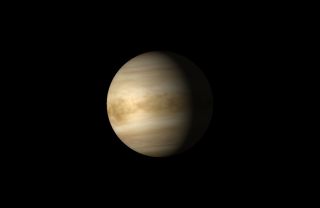 Venus will shine brightly at dawn throughout January 2016. The planet will pass close to Saturn on the morning of Jan. 9.
(Image: © Starry Night Software)

Skywatchers have many reasons to look up in this first month of 2016.

The new year kicked off with just a single bright planet visible in the early evening — Mercury, the planet closest to the sun — and that was for only a few days. But two more bright planets quickly appeared on the scene: Jupiter by late evening and then Mars soon after midnight.

Venus and Saturn will put on a show this month as well; the two planets will engage in an eye-catching conjunction on Saturday morning (Jan. 9). And by month's end, Mercury will reappear low in the east-southeast sky before sunrise, making the five brightest planets visible simultaneously. [Orange Giant Star, Planets and More: January 2016 Skywatching Video]

Here's a guide to help you spot the brightest planets in the January night sky. A few quick reminders: You can use your clenched fist at arm's length — equal to roughly 10 degrees of the night sky — to measure off angular distances. And the brightest stars are equal to first or zero magnitude, while the very brightest objects (the sun, the moon and Venus) are of negative magnitude on the scale astronomers use.

Mercury was visible at dusk low in the west-southwest for the first few days of January. Using binoculars, you can probably follow this rapidly fading planet as it swings westward and heads for inferior conjunction (when Mercury comes between the Earth and the sun) on Jan. 14. The planet should reappear by the last week of January, when it will be very low in the east-southeastern morning twilight, about 8 degrees to the lower left of Venus.

Venus is by far the easiest of the predawn sights to spot. The lovely Morning Star rises like a beacon in the southeast. Notice, however, that the amount of time Venus appears before sunup shrinks from nearly 3 hours to less than 2 hours during January. That's an omen of a lull in the planet's visibility that will last for the next eight months.

Telescopes will show Venus as a small globe about three-quarters lit in January, but you won't need any optical aid to enjoy Venus creeping to the left and down past the rising constellation Scorpius. The planet gets to within 6.3 degrees of Antares on Jan. 7, tremendously outshining that bright star. In addition, Venus has an eye-catching interaction with Saturn: On the morning of Jan. 9, the two planets have a very close conjunction (see "Saturn" below) during which Venus outshines the "Lord of the Rings" by a factor of 63 to 1.

Mars is a first-magnitude morning object that moves from the constellation Virgo into Libra by Jan. 17. The planet rose about 1.5 hours after midnight at the start of the month, and will appear at around 1 a.m. by month's end. Mars is becoming increasingly well placed for observation in the southeastern sky.

Jupiter rose at around 10:30 p.m. local time at New Year's, and will come up at about 8:30 p.m. at January's end. The giant planet rises almost due east in the sky, so it gains altitude rapidly as the evening grows late, climbing more than 20 degrees in less than 2 hours.

With Jupiter entering the evening sky, more and more telescopic observers will be making its reacquaintance for the first time since the gas giant descended into the sunset last June and July. Jupiter gains altitude through the night, reaching its highest point in the south in the lonely silence of the early-morning hours. This regal planet hovers less than 2.5 degrees above a waning gibbous moon on Jan. 27. Jupiter is already at magnitude minus 2.3. It will become a little brighter and larger when the big planet reaches opposition in early March.

Saturn appears to climb up toward Venus each morning. The two gorgeous planets finally come into conjunction on Jan. 9, when they will be separated by just 0.3 degrees, with Saturn sitting to the upper right of Venus. The duo will spend the rest of the month spreading farther apart, with Saturn getting progressively higher — this golden planet will be high in the southeast at the break of dawn at month's end — while Venus gradually gets lower. The star Antares (whose name means "rival of Mars," a nod to the star's red color) is also part of the scene before dawn. Antares remains within 7 or 8 degrees of Saturn all month.

Editor's note: If you capture a great photo of Venus, Saturn or any other night-sky sight and want to share it with us and our news partners for a story or gallery, we want to know. Send your images and comments in to: spacephotos@space.com.