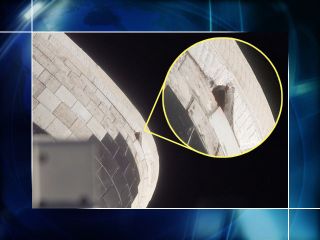 This photograph, taken by an STS-117 crewmember, shows the damaged thermal insulation blanket on the left OMS pod of the space shuttle Atlantis on June 10, 2007.
(Image: © NASA.)

HOUSTON -Astronauts might have to squeeze in a repair operation during this week?sspacewalks to mend a torn insulation blanket on the rear section of the spaceshuttle Atlantis, mission managers said Sunday.

The4-inch by 6-inch (10-centimeterby 15-centimeter) triangular flap of heat-resistant fabric is located on the leftOrbital Maneuvering System (OMS) pod of the shuttle. It was spottedby Atlantis? astronaut crew shortly after they reached orbit Fridayevening.

Imagesshowing a closerlook at the damage, taken today by STS-117 mission specialist Danny Olivas,suggest the blanket was uplifted by air rushing past the rear section of theshuttle during its ascent into orbit.

?It lookslike?and the experts were completely unanimous?that this was not impact damagethat caused this blanket to raise up. It was [aerodynamic] loads,? said John Shannon, chairman of NASA?s STS-117 MissionManagement Team (MMT).

?Duringlaunch, that area sees a pretty significant airflow,? Shannon added. ?It lookslike there might have been a gap between two [nearby thermal insulation] tilesthat allowed some air to impinge directly on the blanket.?

Engineersare concerned the torn section of blanket, which is currently folded back onitself, could heat up during reentry and damage the internal graphite-epoxyhoneycomb structure of the OMS pod underneath.

While that isnot likely threaten the integrity of Atlantis during reentry, it ?would meansome refurbishment on the ground that we don?t really want to do,? Shannonsaid.

The goodnews is that, because the torn section of blanket did not wrench awaycompletely, repairing it will be a relatively simple matter of flattening itback down and securing it using pins or some other method, Shannon said.

That repair, if it is required, willlikely take place during one of the latter spacewalks planned for the mission,Shannon said.

The STS-117 crew is scheduled toperform three, and possibly four, spacewalks over the next several days toinstall new truss segments and solar arrays onto the ISS that were delivered byAtlantis.

The MMTexpects to make a final decision on whether to repair the blanket on Monday,Shannon said.