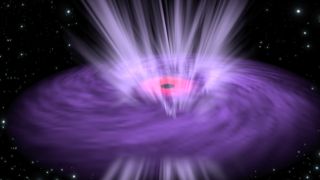 Hot gas streaming out from the region around supermassive black holes can experience rapid and extreme changes in temperature, according to observations from NASA's Nuclear Spectroscopic Telescope Array (NuSTAR) telescope.

Supermassive black holes are thought to be embedded in the middle of most large galaxies, including the Milky Way. These monsters feed from a surrounding disk of gas, dust and other material, called an accretion disk. The gravitational pull of the black hole can heat up material in the accretion disk, causing it to radiate light.

Young and energetic black holes can gobble up only so much material, however, before the feeding process produces hot streams of gas from the accretion disk. These black-hole winds travel at about a quarter of the speed of light, and have the potential to disturb star formation in their wake.[Strangest Black Holes in the Universe]

Using NuSTAR and the European Space Agency's XMM-Newton telescope, scientists have for the first time observed winds from a nearby black hole interacting with radiation coming from the black hole's edge, according to the authors of a study.

Harrison's team wanted to learn about the temperatures of these winds, so they looked at X-rays coming from the black hole's edge. As the X-rays pass through the winds, chemical elements present in the winds — such as iron and magnesium — absorb some wavelengths of light in the X-ray spectrum. The spectrum then displays holes, also called "absorption features," revealing more about the wind's composition.

"While observing this spectrum, the team noticed that the absorption features were disappearing and reappearing in the span of a few hours," according to a statement from the California Institute of Technology (Caltech). "The team concluded that the X-rays were actually heating up the winds to very high temperatures — millions of degrees Fahrenheit — such that they became incapable of absorbing any more X-rays. The winds then cool off, and the absorption features return, starting the cycle over again."

Being able to study the properties of these winds offers scientists an opportunity to learn more about how those winds impact the evolution of galaxies.

"We know that supermassive black holes affect the environment of their host galaxies, and powerful winds arising from near the black hole may be one means for them to do so," Fiona Harrison, NuSTAR principal investigator and a physics and astronomy professor at Caltech, said in the statement. "The rapid variability, observed for the first time, is providing clues as to how these winds form, and how much energy they may carry out into the galaxy."

The researchers are planning to conduct more observations to learn how the winds are formed, where their source of power is from and how long they last, among other features. The findings will be published tomorrow (March 2) in the journal Nature.