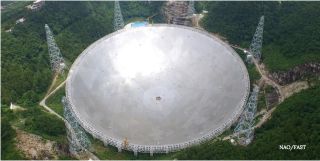 The world's largest single-dish radio telescope will join the hunt for intelligent aliens that could be building a "megastructure" around the star KIC 8462852 — otherwise known as "Tabby's Star."

The recently completed Five-hundred-meter Aperture Spherical radio Telescope, or "FAST," occupies a valley in the southwestern Guizhou province of China. With a diameter of 500 meters, this monstrous telescope is almost 200 meters wider than the famous Arecibo Observatory in Puerto Rico. And now FAST will join the Breakthrough Listen SETI project to "listen in" on the strange star.

Though the likelihood of actually finding any chatty aliens around the star is slim, great mystery still surrounds the cause of some dramatic dimming events. NASA's Kepler space telescope recorded these events as transits that caused the star to dip in brightness of up to 22%. Kepler looks for exoplanets by detecting their transits (i.e. as a planet orbiting another star passes in front, blocking a tiny fraction of starlight). Typically, these transit events block a fraction of one percent of starlight.

Add to these unprecedented transit events the fact the star has apparently been dimming for over a century, and astronomers have been presented with a quandary: what is blocking the light from Tabby's Star?

One hypothesis put forward is that the dramatic transits were caused by a cloud of comets, but that explanation has fallen short of proving the source of the anomaly. Most likely is that Tabby's Star's weirdness is being caused by some overlooked phenomenon, or a completely new natural phenomenon that has yet to be understood.

But say if the cause isn't natural? What if there's an advanced alien civilization building some kind of "Dyson Sphere"-like structure — basically a star-enshrouding solar array that is designed to harness all the star's energy? Unlikely as it may sound and, as Occam's Razor dictates, aliens are the least likely explanation, Breakthrough Listen will study the star and it now has a powerful new tool to add to its growing arsenal of radio antennae.

It was announced that FAST would be joining Breakthrough Listen earlier this month, and now it looks like hopes are high that it will be committed specifically to the monitoring of Tabby's Star despite a busy observing schedule.

"The FAST telescope will be absolutely incredible for conducting extremely sensitive searches of Tabby's star for evidence of technologically produced radio emissions," Andrew Siemion, director of the Berkeley SETI Research Center and co-director of Breakthrough Listen, told the South China Morning Post. "We are very excited to work with our colleagues in China on conducting SETI observations with FAST, including of Tabby's star. Within its frequency range, FAST is the most sensitive telescope in the world capable of conducting SETI observations of Tabby's star, and will be able to detect the weakest signals."

Although it's uncertain when FAST will be joining the effort to study Tabby's Star — one unnamed source indicated it could be up to two years before FAST will focus on the effort — Beijing Planetarium director Zhu Jin pointed out that it wouldn't be hard for FAST to participate as the telescope's very wide viewing angle and individual steerable dish tiles would let it observe Tabby's Star while carrying out other science.

"Looking at Tabby's star on FAST will be a very easy thing to do," said Zhu. "When the telescope was proposed, SETI was listed as a major goal. I don't think we can turn a blind eye to Tabby's star."