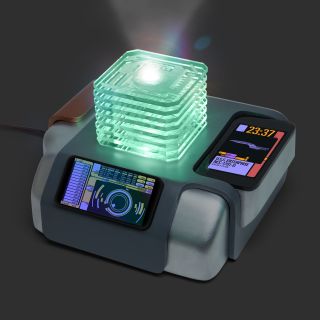 The ThinkGeek "Star Trek" White Noise Sleep Machine is one of a handful of fake April Fools Day items offered by the online retailer.
(Image: © ThinkGeek)

We at Space.com would be happy to own either of these products (and we've started brainstorming how to make a Coke bottle rocket that lands upright), but alas, they are purely fiction. However, some of the company's previous April Fools' Day items have been so popular with fans, that the company consented to actually produce them. [Best Gifts for Space Fans]

ThinkGeek started its April Fools' Day tradition in 2001. The fake items appear as regular stock on the website. But after a customer clicks the Buy button, the buyer is alerted (via a photo of a very awkward-looking seal) that he or she has fallen for an April Fools' Day prank.

Some of the fake items are clearly not real. The obvious ones are physically impossible, like 2014's Mr. Beard Beard machine. The user picks a beard style (they come in little cups, like those used in instant coffee machines), then is invited to stick his or her face into the machine for a new facial hairstyle in minutes. In this year's line of products, there is one that immediately seems too absurd for even ThinkGeek to actually produce: the 24-foot-tall inflatable Colossal Titan Lawn Ornament from the (terrifying) anime series "Attack on Titan."

Other fake items on this year's list are the Useless Light Switch (which immediately turns itself off anytime someone turns it on) and a Flavor of the Day Desktop Calendar — a lickable, page-a-day calendar that actually sounds quite fun and perhaps is not entirely outside the realm of possibility.

But many of the prank items, from this year as well as past years, will most likely fool a fair number of shoppers, because they aren't any crazier than the real items that are sold on the site. For example, some past April Fools' Day items have included a Voltron Cat Condo, Squeeze Bacon, an Eye of Sauron Desk Lamp and Batman Family Car Decal Set.

Silly as they sound, ThinkGeek has quite a few real items in its store that are no less absurd: an umbrella with a handle shaped like the sword Longclaw from the TV show "Game of Thrones"; a mug shaped like a 20-sided die; and a letter opener shaped like Batman's Batarang. ThinkGeek also offers too many "Star Wars" kitchen items to name, but the R2-D2 measuring cups, a Death Star waffle maker, and a lightsaber popsicle maker (it glows) stand out. These items achieve pretty much the same level of nerdy absurdity as the fake ones.

This isn't lost on ThinkGeek, and a bunch of the company's past April Fools' Day Items have become real items for purchase, including the Tauntaun sleeping bag from the "Star Wars" universe (the inside fabric looks like tauntaun guts). Other fake items that have become real: the Flux Capacitor USB Car Charger; Unicorn Drinking Horn; Canned Unicorn Meat (actually a dismembered unicorn plush doll); and a Technomancer 2.0 Digital Wizard Hoodie (a blue light glows from inside the droopy sleeves and hood).

It would be fun to see the SpaceX Vertical Landing Mentos & Diet Coke Rocket or the Star Trek White Noise Sleep Machine become a reality, but even if they don't, there's no shortage of ThinkGeek items for space fans to love