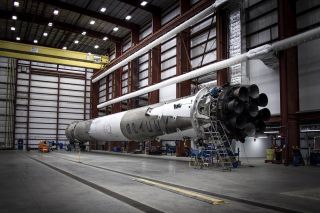 The first stage of the Falcon 9 rocket that SpaceX landed during an orbital launch on Dec. 21, 2015, rests in a hangar at Cape Canaveral Air Force Station in Florida.
(Image: © SpaceX)

The rocket that SpaceX landed in a historic first last month is in great shape and ready to be fired again, company CEO Elon Musk says.

On Dec. 21, SpaceX successfully brought the first stage of its Falcon 9 rocket back to Earth for a soft landing at Cape Canaveral Air Force Station in Florida — the first time this had ever been done during an orbital launch. The achievement is a big step forward in SpaceX's quest to develop fully, rapidly reusable rockets, which Musk has said could slash the cost of spaceflight by a factor of 100.

Now there is more good news for SpaceX: The Falcon 9 stage appears to have survived its liftoff and landing with no ill effects, Musk said. [SpaceX's Epic Falcon 9 Rocket Landing in Pictures]

"Falcon 9 back in the hangar at Cape Canaveral. No damage found, ready to fire again," Musk wrote in an Instagram post on Dec. 31, which accompanied a photo of the booster.

SpaceX plans to perform a "static fire" of the landed rocket stage on the ground at Cape Canaveral at some point, to confirm that all of the stage's systems are working well and that the booster could achieve full thrust during a re-flight mission, Musk said during a teleconference with reporters on Dec. 21 shortly after the landing. On Dec. 23, NASA released a video showing new views of the Falcon 9 landing.

This particular Falcon 9 stage will not take to the skies again, however; SpaceX aims to preserve it as a sort of museum piece, Musk added. But the company does intend to land and then re-fly a booster in the near future, he said.

"We have quite a big flight manifest, and we should be doing well over a dozen flights next year," Musk said during the Dec. 21 teleconference. "So I think, probably sometime next year, we will aim to re-fly one of the rocket boosters."

The rocket landing occurred during a launch whose main purpose was lofting to orbit 11 satellites for SpaceX customer Orbcomm. That part of the mission also went well, with all spacecraft achieving their intended orbits, SpaceX representatives said.

The Dec. 21 liftoff was the return-to-flight mission for SpaceX and the two-stage Falcon 9, which had failed during a June 28 launch of the company's robotic Dragon cargo capsule toward the International Space Station for NASA.

SpaceX holds a $1.6 billion contract with NASA to fly at least 12 such uncrewed re-supply missions. The next one is scheduled to liftoff sometime this month.

The June 28 failure was traced to a faulty steel strut in the Falcon 9's upper stage. In the aftermath of the accident, Musk vowed that the company would test every one of the hundreds of such struts that go into each Falcon 9.