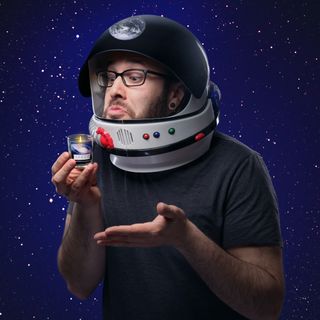 The nerdy toy makers at ThinkGeek used input from NASA scientists to create a candle that smells like space.
(Image: © ThinkGeek.com)

NEW YORK — Space enthusiasts can now bring the smell of the cosmos into their homes without ever leaving Earth with a new votive candle created by an online toy company.

The minds behind ThinkGeek — a company that specializes in nerdy gifts — have crafted a scent that smells like outer space in candle form.

"Space is the ultimate science-y thing. When we decided to come up with a line of geeky candles, there was a lot of debate as to what type of scents we'd be going after," ThinkGeek spokesman Steve Zimmermann told SPACE.com last week during the American International Toy Fair here. "One of them obviously is space. It's also the biggest challenge which kind of excited us. Has anybody ever really contemplated what space would smell like?"

Zimmermann and his colleagues quickly found out that plenty of people were asking and answering that same question.

"Obviously they don't stick their heads out the window," Zimmermann joked, "but it's one of those things that when the shuttle landed, they're getting certain smells off of it."The ThinkGeek team responsible for the candle called on NASA for tips on how to make the most accurate — yet best-smelling — aroma possible. [Astronaut Explains Space Smells (Video)]

Some of those smells include a gunpowder-smelling, ozonelike odor that is distinct to space. Astronauts returning from space walks have described the smell of space as out-of-this-world acrid aroma that could be the result of atomic oxygen adhering to their spacesuits.

But the creators behind the smell of space candle did not think a burning smell would sell well in a world filled with flowery votives.

"Honestly, it does smell like there's a little bit of lavender in there," Zimmermann said. "I'm not sure if that was NASA-approved lavender, but it's definitely one of those things that we put there because it's a candle."

"Our first versions were very, very gunpowdery and very, very smoky and really more into the acrid ozone smell," Zimmermann added. "It took a little bit to refine what we were looking for, so when we came out with it, we knew this was going to be the thing."

The smell of space candle is available as one in a new set of four theme-scent candles sold by ThinkGeek. The other scents include a deodorant-like homage to Nirvana called "Teen Spirit," a cinnamon scented "Retro Arcade" candle and a fresh, green ode to the "Lord of the Rings" called "Middle Earth."