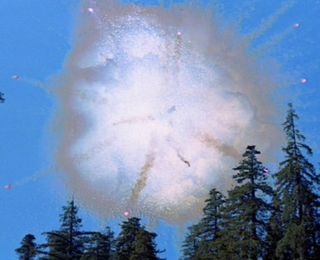 The "Star Wars" Death Star exploding over the surface of Endor would have rained down fiery fragments that would have meant certain death for anything still on the moon.
(Image: © Disney/Lucasfilm)

If you're a fan of the adorable Ewoks from the "Star Wars: Return of the Jedi" movie, you may want to sit down.

The "Star Wars" rebels may have destroyed the Death Star, but the sinister satellite still managed to destroy the rebel base — and the moon of Endor — in the end. The Ewoks wouldn't have survived the explosion, says one planetary scientist.

"The Ewoks are dead. All of them," said Dave Minton, a researcher at Purdue University. Minton, who studies impacts and planetary formation, is well versed in the mechanics of collisions in space and the damage they can do, and he set forth this bold claim in a white paper submitted to and published by Tech Insider. [10 Real Alien Worlds That Resemble 'Star Wars' Planets]

In the "Star Wars" film "Return of the Jedi," a Death Star under construction around the moon Endor is detonated over the surface. The result would have rained large chunks of material down on the moon.

"There's little doubt in my mind that a significant amount of the structure ended up on the surface of Endor, probably in a spectacular fashion," exoplanet hunter Stephen Kane told Space.com by email. Kane, who was not involved in the research, is an assistant professor of astronomy at San Francisco State University.

The end of the Ewoks

The Endor holocaust first exploded on the "Star Wars" fan site TheForce.net in 1997, when astrophysicist Curtis Saxton argued that both Endor and the Ewoks were doomed. But like most science fiction movies, details about the moon vary from scene to scene, making details difficult to nail down.

Responding to a call by Tech Insider, Minton used the hologram shown in the briefing scene of the movie to estimate the relative sizes of the moon and the Death Star. Using the diameter of Endor found on Wookieepedia (3,000 miles, or 4,900 kilometers), Minton calculated how large the destructive satellite was and how far it orbited from the moon. With rebels and storm troopers moving at relatively normal speeds, he assumed gravity pulled down on them about the same as it did on Earth and used this to determine the moon is only slightly more massive than Mars, though it boasts a smaller diameter. This means that the core of the moon is denser than iron, though less than uranium.

With the size of the Death Star firmly in hand, Minton sought to determine how quickly it spun. To keep one side permanently facing Endor, as the briefing scene shows, would require the moon to spin a little more than once every hour, making it what Minton called "an exceedingly fast rotator."

Kane explained that, from a physics perspective, such a rotation would never have allowed the moon to form. Physics, of course, has never really stopped movie makers.

"Since [director George] Lucas doesn't care that 'parsec' is a unit of distance, I suspect he doesn't give a damn about Newton's version of Kepler's third law," Kane said, taking a stab at Han Solo's boast that his ship — the Millennium Falcon — made the Kessel Run in less than 12 parsecs.

Nor would that rotation match the onscreen cinematics.

"The rebels wouldn't have finished tying their shoelaces before they had lost their chance to attack the imperial bunker during the day," Kane said.

With such an impossible rotation, Minton concluded that the Death Star was instead held aloft by anti-gravity technology, which, he said, is widely available in the "Star Wars" universe.

Minton also concluded that the relatively gentle explosion of the second Death Star when compared to the first would lead to limited vaporization of its material, and that the fragments would not get much of a boost in velocity from the explosion.

"More or less what happens after the destruction is that the entire mass of the Death Star simply falls onto the location of the shield generator," Minton said.

Using his own crater-simulation program, Minton determined that a ball of fragments from the Death Star would leave behind a crater almost 4 times larger than the Chixculub crater in Mexico associated with the extinction of the dinosaurs. Such an impact would obliterate the surface of Endor, with every body of water on the moon flash-heating into steam and every forest igniting in a global firestorm.

Kane agreed with this assessment, noting that it would be far more humane for the Ewoks to suffer a quick death.

"Would any of the Ewoks have survived the holocaust resulting from the destruction of the Death Star? God, I hope not!" he said.

Surviving Ewoks would suffer from a slow death by starvation.

"Given that 'Return of the Jedi' portrays the Ewoks as cannibals — yes, cannibals — they may possibly survive a small period of time by eating a few captured imperials and then starting on each other until they're down to the last Ewok, surrounded by the bones of its comrades and the charred remains of its home world," Kane said.