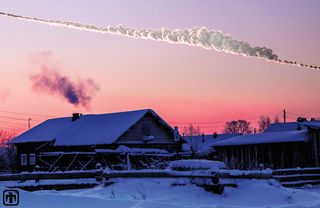 Reconstruction of the path of an asteroid that exploded over Chelyabinsk, Russia, on Feb. 15, 2013. This year, on Feb. 9, researchers held a press conference to discuss the study of asteroids and the dangers of impacts.
(Image: © Sandia Labs CC BY-NC-ND 2.0 )

An international band of asteroid experts gathered Tuesday to discuss the future of asteroid research and avoidance in preparation for the second annual Asteroid Day.

On June 30, 1908, a large meteorite or comet exploded above the remote Russian countryside, flattening 770 square miles (1,990 square kilometers) of forest. Now, June 30 is Asteroid Day, part of a campaign to raise awareness of the dangers of an asteroid strike on Earth.

At a press conference Feb. 9, the organizations behind Asteroid Day announced their plans for the latest effort, inviting a panel of experts to speak about the need for more study of asteroids as well as a commitment to preventing a large body from striking the Earth. The event was held at the European Space Research and Technology Centre (ESTEC). [Near-Earth Asteroids: Famous Space Rock Flybys and Close Calls]

Strikes from asteroids and comets big enough to threaten people are rare in any given year, but over time they are just about inevitable, the researchers said. For instance, on Feb. 13, 2015, a meteor fell near Chelyabinsk, Russia, and exploded some 18 miles (29 km) above the Earth's surface, the shock wave breaking windows and causing injuries to 1,500 people.

"An event like Chelyabinsk happens about once every 50 years, and we don't have a system designed to discover and track these things," Mark Boslough, a physicist at Sandia National Laboratories who is one of the founders of Asteroid Day, said at the conference.

(Even more recently, reports came in of a meteorite that may have killed a person in India, but it is unclear whether the object was actually a meteorite.)

The organizers of Asteroid Day, among them Brian May, an astrophysicist and former guitarist for the rock band Queen, noted that concerted efforts are needed to find asteroids that might collide with the Earth, and to send spacecraft to study them.

"This is not about fearmongering," said Grig Richters, filmmaker and co-founder of Asteroid Day. "It's about being aware there is a potential threat, and understanding better where we are from."

"Bringing space technology to bear to deflect asteroids will require widespread public support," said Tom Jones, a former space shuttle astronaut who also chairs the Association of Space Explorers' Committee on Near-Earth Objects. "We only need modest resources compared to the cost of absorbing impact. Asteroid Day is to educate the public so we can work together to avoid an impact."

To that end, the scientists who came to ESTEC highlighted some of the work being done to study asteroids — to learn more about them, understand what they are made of and come up with better strategies for preventing a disaster by avoiding getting hit.

One such mission is the proposed Asteroid Impact & Deflection Assessment (AIDA). Planned for a 2020 launch, the spacecraft in this mission would approach the asteroid 65803 Didymos, a binary asteroid that consists of two bodies, one about 800 meters (2,600 feet) across and the other about 150 m (490 feet) across. The craft would orbit the larger of the two bodies, launching a 660-lb. (300 kilograms) impactor at the smaller asteroid as it makes a close approach to the Earth. (While Didymos can get within a few million miles of the planet, there's no danger the object will hit Earth.)

Researchers would measure how much the impact moves the smaller asteroid, and how the asteroid's structure and surface hold up after the strike. [100-Foot Asteroid to Buzz Earth Next Month]

Aside from sending probes to investigate what asteroids are made of, the first big task is to catalogue where the possible threats are, said Detlef Koschny, the Space Situational Awareness Near-Earth Object co-manager at the European Space Agency. ESA established a near-Earth object segment in 2008 to help Europe detect such asteroids by observing wide swathes of the sky. One part of the program, at the University of Pisa in Italy, will track where the asteroids are going; ESA is also discussing further work with other countries.

In Europe, a prototype telescope that can scan the whole sky should be in place next year, said Patrick Michel, a planetary scientist and senior researcher at the French National Centre for Scientific Research. (He noted that the United States has its own efforts in place as well.) And citizens can help, too, he said: "You need to make sure you observe an object again, to make sure we don't lose it again. Amateur astronomers play an important role."

Detection is so important because the further out you find an asteroid, the easier it is to move it, the researchers said. The nuclear bomb approach, made famous by the movie "Armageddon" (and the 1979 film "Meteor") would only be worth doing if there is very little warning, Boslough said, "and we wouldn't be able to test it in space."

The technology, he said, isn't ready yet in any case.

Famed science communicator Bill Nye was also a panelist, and said since humans have the capacity to alter asteroid paths if necessary, it behooves humanity to do it. "We've no evidence the dinosaurs had a space program," he said, "and it cost them."