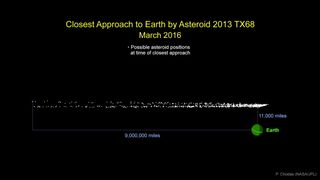 Graphic indicating the cloud of of possible locations for asteroid 2013 TX68 during its closest approach to Earth on March 5. The asteroid could come as close as 11,000 miles, or stay about 9 million miles away. There is no danger of an impact on this flyby.
(Image: © NASA/JPL-Caltech)

An asteroid as long as a basketball court will give Earth a close shave next month — though scientists aren't sure just how close.

"The variation in possible closest-approach distances is due to the wide range of possible trajectories for this object, since it was tracked for only a short time after discovery," NASA officials wrote in a statement Wednesday (Feb. 3). [Potentially Dangerous Asteroids in Pictures]

"The possibilities of collision on any of the three future flyby dates are far too small to be of any real concern," Paul Chodas, manager of the Center for NEO Studies at NASA's Jet Propulsion Laboratory in Pasadena, California, said in the same statement. "I fully expect any future observations to reduce the probability even more."

Scientists think the near-Earth object that exploded over the Russian city of Chelyabinsk in February, damaging buildings and injuring more than 1,000 people, measured about 65 feet (20 m) across. If 2013 TX68 or another asteroid of its size were to slam into Earth, it would probably explode in an airburst about twice as energetic as the Chelyabinsk event, NASA officials said.