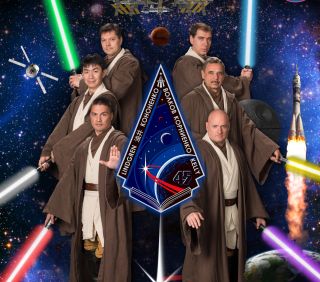 The crew of expedition 45 got into the spirit of "Star Wars" before their trip to the International Space Station.
(Image: © NASA)

This weekend, fans flocked to the opening of the new "Star Wars" film, "The Force Awakens," to see intelligent droids, agile spaceships and stunning views of a galaxy far, far away. But many of the exciting technologies and landscapes in the "Star Wars" universe have counterparts in the real world.

But as NASA and other space entities push humanity deeper and deeper into space — and increase the range of capabilities in space — the fiction of a world like "Star Wars" starts to resemble reality. There are robots that serve valuable functions for humans in space, there are new kinds of rockets and spacecraft technology, and new planets beyond our solar system are being discovered every week.

Science fiction is important for the advancement of science, because it makes people dream about new possibilities. "Star Trek" has inspired young people to become astronauts, author Arthur C. Clarke introduced ideas for near-future technology that scientists and engineers translated into reality, and films like "Star Wars" have fed young scientists' hunger to find planets beyond our solar system. Here are just a few of the ways NASA is making "Star Wars" a reality. [10 Real Alien Worlds That Resemble 'Star Wars' Planets]

In 1977, the first "Star Wars" movie hit theaters, introducing fans to a battle for the fate of the galaxy. The good guys were the Rebel Alliance. They represented the light side of the force and individual freedom. The bad guys were the Galactic Empire, and everything about them was evil — Darth Vader was the embodiment of what they represented. Even the smaller ships flown by individual Empire soldiers, called TIE fighters, looked dark and insectlike.

A next-generation version of the engine is being considered for a project that would capture near-Earth asteroids and put them in an orbit around the moon, so that astronauts could go visit them, according to NASA.

There are more than a few robots assisting NASA scientists, astronauts and engineers. Perhaps the most "Star Wars"-like robot is the Robonaut (short for "robot astronaut"), a very humanlike robot designed to do simple, repetitive tasks aboard the International Space Station. By taking on these boring jobs, the robot frees up the human astronauts to do more intensive tasks (or just give them a break).

Plus, Robonaut looks more than a little bit like the "Star Wars" bounty hunter Boba Fett.

The droids of "Star Wars," like C-3PO and R2-D2, serve many purposes, from translating languages to repairing spaceships, to providing comic relief. But the designers of Robonaut have even bigger dreams for this droid: They want it to assist astronauts on spacewalks, perform tasks that pose a danger to humans or even administer medical assistance (with the help of a human on the ground). The next-generation version of the bot, Robonaut-5 or R5, also known as Valkyrie, might one day land on Mars ahead of human astronauts. Once it arrives, the bot could help build astronaut living spaces or do experiments. NASA recently handed off prototypes of R5 to scientists at the Massachusetts Institute of technology and Northeastern University.

When Luke Skywalker begins his training as a Jedi Knight, Obi-Wan Kenobi rigs a makeshift training exercise: He makes Luke dodge laser blasts that are spewed from some kind of spherical, floating robot.

According to a statement from NASA, David Miller, NASA's chief technologist, showed that scene to a group of students at MIT. He pointed to the floating, laser-blasting bots and said, "I want you to build me some of those."

Challenge met. Miller's request led to the creation of something called Synchronized Position Hold, Engage, Reorient, Experimental Satellites (SPHERES). These bots, which are about the size of bowling balls, are used on the International Space Station, where they float sort of like their hovering "Star Wars" counterparts. The SPHERES are used to test the maneuvers that spacecraft must do during a rendezvous or docking.

This is a real moon of Saturn, called Mimas.

This the Death Star, the massive weapon of destruction built (twice) by the Empire.

All the planets in the galaxy

Back in the 1970's, when George Lucas decided that Luke Skywalker's home planet, Tatooine, would have a double sunset, scientists didn't even know for sure if planets existed around other stars. Now, there are hundreds of confirmed exoplanets — even a few that would have double suns like Tatooine.

In fact, now that scientists know that exoplanets are extremely common in the Milky Way galaxy (perhaps even outnumbering stars), NASA says many of the worlds from the "Star Wars" universe may have doppelgangers in nature. There are icy worlds like Hoth, and scientists are getting closer to finding planets that could harbor life.