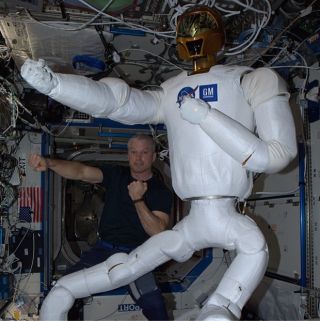 NASA astronaut Steve Swanson poses with the robot Robonaut 2 on the International Space Station after completing an upgrade that gave the robot legs.
(Image: © NASA/Steve Swanson via Instagram)

Look out, astronauts – your companion robot on the International Space Station is now mobile! NASA's Robonaut 2 has received a set of legs that will help it move around the station, and will eventually enable the bot to work on repairs both inside and outside the orbiting outpost.

NASA astronaut Steve Swanson, who commanded the station's Expedition 40 crew, helped attach the appendages to the humanoid robot in late August before returning to Earth last week. The legs will help the robot move around the space station to complete simple tasks. Later this year, after a few changes to its upper body,  later this year, Robonaut 2 will use its new legs to venture outside for its first spacewalk as well.

"You can only do so much if you're fixed on a stanchion, which is what we've been on for the past couple of years," Ron Diftler, principal investigator for the Robonaut project, said in a televised interview on NASA Television. "With the addition of legs, we'll be able to go mobile." [See photos of NASA's Robonaut 2 humanoid robot]

While the upper half of Robonaut looks a lot like a human, the legs don't resemble a person's legs very much. Instead of feet, the robot has clamps that allow it to latch onto and climb up on objects. The legs are also longer than human legs — a span of 9 feet (2.7 meters) — and are more flexible, giving the robot more ways to cling to things inside or outside the station.

"In space, you don't use your human legs in the way you use them on the ground," Diftler said. "We didn't adhere to the human form because it didn't make any sense."NASA researchers did not even have legs in mind when they sent Robonaut 2 to the space station in 2011, but it was possible to add the appendages with some upgrades to the robot's wiring and computer systems."

The legs were flown to the space station aboard a cargo ship in April.Yet, even while it was fixed in place, Robonaut 2 was occasionally used by space station crews. In February 2012,  RobonautIt shook hands with Expedition 30 commander Dan Burbank, and earlier this year, the bot used a "task board" to test its ability to manipulate knobs, switches and buttons. More recently, Robonaut has been put to work moving "soft goods," such as covers that provide thermal protection for space station components.