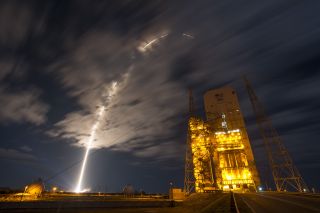 CAPE CANAVERAL, Fla. — A commercial Cygnus cargo ship launched into space late Tuesday (March 22), streaking into the Florida night sky on a mission to deliver a record-breaking load of NASA experiments and gear to the International Space Station.

The Orbital ATK-built Cygnus blasted off atop an Atlas V rocket at 11:05 p.m. EDT (0305 GMT) in a smooth liftoff under the light of a nearly-full moon from Cape Canaveral Air Force Station here.

"For those of you that were here and saw it, I think you'd agree that it was an absolutely spectacular launch," Kenneth Todd, operations integration manager for the International Space Station Program, said early Wednesday morning (March 23) during a post-launch news conference. [Launch Photos: See Orbital ATK's Cygnus Streak into the Night]

The cargo ship's solar arrays deployed and unfurled as planned about 2 hours after launch, keeping Cygnus on track for its scheduled Saturday (March 26) arrival at the orbiting lab.

"We're looking forward to that, and getting the Cygnus on board and opening the hatch," former NASA astronaut Frank Culbertson, president of Orbital ATK's Space Systems Group, said during the post-launch briefing. "Maybe they'll find a few Easter eggs on board — who knows?"

The current Cygnus spacecraft is filled to the brim with science gear, a haul that includes nearly 7,500 lbs. (3,400 kilograms) of vital crew supplies, hardware and research tools bound for the station, NASA officials said, buoyed by the lifting power of the Atlas V rocket. It's also carrying some gear that isn't destined to stay on the station, including a large-scale fire experiment and a cloud of five microsatellites to set free after the craft is released from the station in May.

Orbital ATK named the Cygnus spacecraft the S.S. Rick Husband, in honor of NASA astronaut and space shuttle commander Rick Husband, who died on Feb. 1, 2003 during the ill-fated STS-107 mission aboard the shuttle Columbia. Husband and six crewmates were killed when Columbia, which suffered wing damage during launch, broke apart during re-entry.

Cygnus launched just as the space station flew overhead, separated from its booster and settled into orbit around the Earth, where it will spend the next three days carefully maneuvering into a higher orbit. Early Saturday, astronauts on the space station are due to capture the Cygnus with a robotic arm. American astronaut and space station commander Tim Kopra will man the Canadarm2 robotic arm to retrieve the craft, assisted by British astronaut Tim Peake.

And after that, the real fun begins.

"Once we get the Cygnus on board, we'll have our work cut out for us," Todd said at a pre-launch press briefing on Monday (March 21).

Besides essential crew supplies and consumables, vehicle systems hardware and spacewalking supplies, the crew will unload a variety of experiments to explore. A 3D printer, from California company Made in Space, will help the station produce new tools and experiments, Gecko Grippers will stick to the walls, the Meteor experiment — which made it on board at last — will scrutinize Earth for incoming meteor showers, and Strata-1 will explore how the soil-like regolith that coats asteroids behaves.

Saffire-1, the large fire experiment, will be left behind to burn later once the spacecraft departs. After the cubesats are released and Saffire burns, Cygnus will be host to one final experiment: the Reentry Breakup Recorder will track the craft's breakup as it's destroyed in re-entry over the Pacific Ocean.

Cargo deliveries back on track

This current Cygnus delivery flight is the fifth of 10 missions for NASA by Orbital ATK under a deal worth $2.6 billion. Another company, the Hawthorne, California-based SpaceX, is flying 12 missions under its own $1.6 billion deal, and received a NASA order for five more cargo missions in December, according to SpaceNews.

The space station's supply line is still recovering from that series of failed launches, but after this delivery they'll be back on track with vital consumable supplies, Todd said at the pre-launch briefing.

"The reality is that over a period of time there we didn't see a lot of vehicle traffic," he added. "Getting our consumables back up to the point where they need to be is something that we've been putting a lot of effort in, and our providers here — certainly Orbital ATK here — have delivered in a big way over the holiday season and here again with another mission. We're going to be in good shape on consumables after this mission."

In fact, the space station will be a very busy place for cargo deliveries in the next few weeks. Next week a Progress resupply ship will leave and a new one will arrive a few days later, and then within a few weeks they'll have another exciting arrival.

"Probably in a couple of weeks we're going to hit a first of the space station program, what I consider kind of a milestone — it looks like we're going to have both of our CRS [commercial resupply] providers on board at the same time," Todd said. "We'll have Cygnus as well as SpaceX Dragon. For those of us who worked through the transition from shuttle into this commercial cargo service, it's really a neat thing for us to be able to see both of these vehicles here at the same time. A lot of work for the crew, but certainly a milestone moment for the program.

"We'll have to get creative in terms of making sure we don't put the wrong things in the wrong vehicles when they get ready to leave," he added.

In January, NASA announced the selection of Orbital ATK, SpaceX and Sierra Nevada Corp. to fly a new round of cargo missions to the space station between 2019 and 2024.