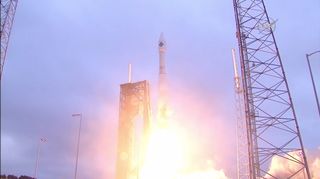 An Orbital ATK Cygnus spacecraft launches into orbit atop an Atlas V rocket on Sunday, Dec. 6, 2015 to deliver more than 3 tons of supplies to the International Space Station. The mission launched from Cape Canaveral Air Force Station in Florida.
(Image: © NASA TV)

With a brilliant afternoon launch, the private spaceflight company Orbital ATK returned its Cygnus cargo ship to flight after a year on hiatus Sunday (Dec. 6), launching vital supplies and NASA gear to the International Space Station.

The unmanned Cygnus spacecraft blasted off from a pad at Florida's Cape Canaveral Air Force Station at 4:44 p.m. EST (2144 GMT) Sunday after a three-day delay caused by bad weather. The liftoff marks the first resupply mission for NASA by Orbital ATK since the loss of its last Cygnus vehicle and Antares rocket in October 2014. The vehicle is expected to deliver nearly 4 tons of supplies, including a life sciences facility, microsatellite launcher, Microsoft HoloLens sets and other tools, when it arrives at the space station on Thursday (Dec. 10).

Orbital ATK was able to mount a second supply mission so quickly after last year's rocket failure by collaborating with the U.S. launch provider United Launch Alliance (ULA), which provided the Atlas V rocket that lofted Cygnus into space Sunday evening. The mission is especially important because there have been two other delivery failures in the past year, one in June by rival U.S. company SpaceX and another by Russia's Federal Space Agency in April. [See photos from today's Orbital ATK Cygnus launch]

Astronauts on the space station were able to watch the launch from their vantage point in orbit, capturing a stunning view of the liftoff. "Caught something good on the horizon. #Cygnus at #sunset on its way to @space_station! #YearInSpace," NASA astronaut Scott Kelly, who commands the station's six-man crew and is flying a one-year mission to the outpost, wrote on Twitter after launch.

"Within a few days [of the failed launch last year], we had a plan," Frank Culbertson, Space Systems Group president at Orbital ATK and retired NASA astronaut, said in a press briefing Wednesday (Dec. 2). "With the help of our friends at ULA, who stepped forward and offered us a ride in a very short period of time, we've reached this point," which is, he added, less than 12 months from the first discussion to launch. "That's quite an accomplishment for the commercial space industry, in my opinion — I think it says a lot about what we can do to support NASA and all of exploration in space."

Cygnus separated from its Atlas V booster about 21 minutes after launching into orbit. It is due to rendezvous at the International Space Station on Thursday (Dec. 10). NASA astronaut Kjell Lindgren will capture the Cygnus using the station's Canadarm2 robotic arm and attach the cargo ship to an Earth-facing port on the outpost's Unity module. That connection will be the first berthing to the port in many years, NASA officials said. NASA astronaut Scott Kelly, who commands the station and is in the midst of a one-year mission in space, is Lindgren's backup.

Orbital ATK's Cygnus spacecraft are autonomous vehicles designed to haul tons of freight to the space station, then burn up in Earth's atmosphere with trash and unneeded items aboard at mission's end. Orbital ATK names its Cygnus vehicles after astronauts, with the one launched Sunday christened the S.S. Deke Slayton II in honor of the former NASA astronaut, one of the agency's original "Mercury Seven" spaceflyers.

Over the course of the successful first two flights in Orbital ATK's $1.9 billion, eight-flight contract with NASA, the company's Cygnus vehicles have delivered more than 7,940 lbs. (3,600 kilograms) to the space station and re-entered the atmosphere with 6,830 lbs. (3,100 kg) of trash. This time, an "enhanced Cygnus" craft is carrying more than 7,700 lbs. (3,500 kg) of supplies up with it — it was able to carry even more than originally planned, due to the additional capacity of the Atlas V, Orbital ATK officials told Space.com.

The spacecraft has 25 percent more storage space than the old Cygnus and lighter solar arrays that unfold into two circular, outstretched wings to generate power. After about a month, the craft will return to Earth, burning up in the atmosphere over the Indian Ocean.

The next Cygnus launch, in March, will also ride to space on an Atlas V, but after that, Orbital ATK will debut an updated version of the company's Antares rocket.

The Cygnus that launched Sunday is carrying several experiments on board, including a life sciences research module the size of a locker, a research project to evaluate flame-resistant and flame-retardant textiles in microgravity, an exploration of gas and liquid movement, and two different systems for networking small satellites or modular pieces into a larger whole. The vehicle is also carrying Microsoft HoloLens headsets that will let experts on Earth help station crewmembers with complicated tasks (originally set to be sent on the failed SpaceX Dragon cargo ship launch in June) and a safety jetpack for spacewalks.

Plus, Cygnus will bring several student experiments on board, five of which first took flight on earlier, failed launches over the past year, along with replacement parts for the space station and added consumables for the crew. (This includes a student-built satellite bearing a medallion that was blessed by the Pope.)

"I just can't emphasize enough how it's important to us, on board ISS, to have a regular cadence of resupply flights," Kirk Shireman, the program manager for ISS, said during the briefing. "We're so much looking forward to having Cygnus back on, and of starting a new era on ISS [going] back to regular resupply flights — that way we can utilize ISS like it was intended." Instead of focusing on catching up, NASA will be able to send up more new experiments and components for the crew.

Still, this flight will bring some goodies of its own when it docks on Thursday: "I'm guessing that Santa's sleigh is somewhere inside the Cygnus," Culbertson added. "And they're probably excited about their stockings coming up, too."