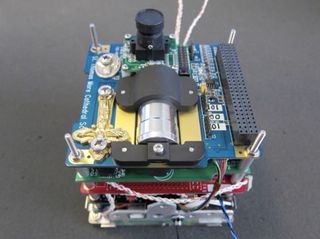 A tiny satellite built by grade schoolers may get a little help from above during its launch toward the International Space Station Thursday (Dec. 3).

The primary payload of the bantam satellite, which measures 4 inches (10 centimeters) on a side and weighs just 3 lbs. (1.4 kilograms), is a camera. But the cubesat also carries a golden-cross medallion that was blessed by Pope Francis, NASA officials said. [Cygnus Cargo Spacecraft Ready For Return to Flight (Video)]

"God willing — and weather holding, and the launch goes — STM is poised to become the first elementary school in the world to have built, tested and launched a satellite, with a lot of generous help from our community," STM Principal Eleanor McCormack said Wednesday (Dec. 2) during a prelaunch news briefing.

All 400 students at STM, which educates children from pre-K through eighth grade, participated in the design, construction and testing of the cubesat, NASA officials said.

STMSat-1 was developed through NASA's Educational Launch of Nanosatellites program, and the space agency supported the project in a number of ways, including the provision of a "mobile clean room" during the construction phase. The school's teachers also took a field trip to NASA's Goddard Space Flight Center in Greenbelt, Maryland, at the project's outset, McCormack said.

"We did a teacher field trip first, and educate[d] the educators, and then reach[ed] out to the community," McCormack said.

STMSat-1 began taking shape more than three years ago, she added. The real impetus was the space shuttle Discovery's "ferry flight" atop a specially modified Boeing 747 jet. This took the retired orbiter to Washington, D.C. for installment at the Steven F. Udvar-Hazy Center, part of the Smithsonian National Air and Space Museum.

STM students watched the flyover, even lining up in the school's parking lot in the shape of a space shuttle, McCormack said.

"We figured if we did this, maybe they would see us from space," she said. "The children were very excited."

This experience got the school's teachers thinking about what their students really understood about space and space exploration, McCormack said. So the educators worked through Catherine Thimmesh's book "Team Moon: How 400,000 People Landed Apollo 11 on the Moon" (Houghton Mifflin, 2006) with the children, so the kids could learn about the complex, collaborative nature of space projects.

And then came STMSat-1, whose primary purpose is giving students hands-on experience with a space mission. If all goes according to plan, the cubesat will be ejected from the space station into free-flying orbit, then photograph the Earth for up to nine months. STMSat-1's images will be received by a ground station at the St. Thomas More Cathedral School, as well as other "remote mission operation centers" in the United States and abroad.

Ultimately, more than 10,000 students around the world will participate in the project, NASA officials said.

STMSat-1 cost about $50,000 in total, McCormack said. The school was able to fund the project by securing grants and getting support from donors and companies in the local community, McCormack said. (For example, the company that helped test STMSat-1 during its balloon-aided test flights charged only for the helium they used.)

In addition to the camera and the Pope-blessed medal, STMSat-1 will also carry to space a plate etched with the names of all the students, faculty and staffmembers at STM, along with people in the community who supported the project, NASA officials said.

You can watch the Cygnus launch live here at Space.com, courtesy of NASA TV.

Orbital ATK holds a $1.9 billion contract to fly cargo to the International Space Station using Cygnus and its Antares rocket. The previous Cygnus flight ended just seconds after liftoff in October 2014 when the Antares exploded; Orbital ATK is now revamping Antares and will use United Launch Alliance Atlas V rockets until the new Antares is ready to fly.