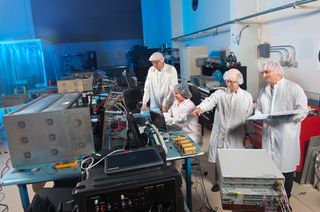 A team of scientists and engineers tests the components of Saffire I and Saffire II, part of a NASA-led program to test the behavior of fire in microgravity conditions.
(Image: © NASA)

A special experiment that will ignite the biggest-ever human-caused fire in space is about to blast off.

Cygnus is packed with nearly 4 tons of supplies and scientific hardware, most of which will be offloaded by astronauts after the freighter arrives at the orbiting lab this weekend. But some of the science gear will remain aboard Cygnus and go with the cargo vessel when it departs from the ISS about two months from now — including the NASA-led Spacecraft Fire Experiment (Saffire), which will set a large-scale fire inside the Cygnus. [Experiment Will Light Largest Fire in Space (Video)]

"NASA’s objective is to reduce the risk of long-duration exploration missions, and a spacecraft fire is one of the biggest concerns for NASA and the international space exploration community," Jason Crusan, NASA’s Advanced Exploration System director, said in a statement.

The Saffire experiment will take place inside a box that measures about 3 feet wide by 2 feet tall by 4 feet long (0.6 by 0.9 by 1.2 meters), NASA officials said. This box contains a computer and instrumentation, as well as a compartment holding the sample material that will be burned. The setup and conditions are designed to be similar to those aboard the ISS and the Orion capsule, which NASA is developing to help get astronauts to Mars and other faraway destinations.

When Cygnus is a safe distance away from the ISS, NASA engineers working with mission team members from Virginia-based spaceflight company Orbital ATK (which built the Cygnus) will beam a signal from Earth that initiates the experiment, which could last up to 2.5 hours.

Onboard sensors and cameras will record a variety of data about the fire and its spread. After this information is relayed down to Earth, Cygnus will be sent to burn up in Earth's atmosphere — the freighter's usual fate.

"Saffire will be the biggest man-made fire ever in space. Currently, we can only conduct small combustion experiments in the microgravity environment of the space station," Gary Ruff, NASA’s Spacecraft Fire Safety Demonstration project manager, said in the same statement.

This experiment is just the first of three space fires that NASA plans to set as part of the Saffire program. Saffire-2 and Saffire-3 will launch later this year on two separate Cygnus missions to the ISS, NASA officials said.

Tonight's liftoff will kick off Orbital ATK's fifth official ISS resupply mission for NASA. The company used its Antares rocket for the first three such launches, the last of which ended just seconds after liftoff in October 2014 when the Antares exploded. Orbital is using an Atlas V to get the Cygnus aloft until a revamped version of Antares is ready to go.