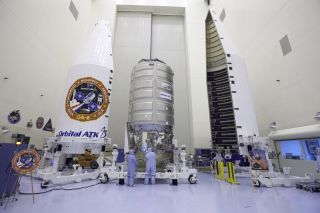 An Orbital ATK Cygnus cargo ship is packed inside its protective nose cone fairing for a planned March 22, 2016 launch atop an Atlas V rocket from Florida's Cape Canaveral Air Force Station. The Cygnus is carrying 3.5 tons of supplies for the International Space Station.
(Image: © NASA)

CAPE CANAVERAL, Fla. — An unmanned Cygnus cargo spacecraft launching tomorrow (March 22) is ready to lug more up to the International Space Station than ever before, including experiments primed to spy on meteors, 3D print rare parts and start a huge fire.

The commercial spacecraft, built by Orbital ATK, is scheduled for launch at 11:05 p.m. EST (0305 on March 23 GMT) and will approach the station for three days before it's snapped up by the space station's robotic arm. Then, the space station crew will begin to unload the fresh crop of supplies and experiments - nearly 3.5 tons of new gear for the orbiting laboratory.

They'll take off nearly all the supplies, anyway — one large box, among the first loaded into Cygnus before launch, will remain behind in the craft for the duration of Cygnus' mission. That tool, called Spacecraft Fire Experiment-1 (Saffire-1), is better kept separate from the station and its crew, its researchers said: It will be the largest piece of material ever burnt in space. [Touring the Cygnus Supply Spacecraft Clean Room (Photos)]

While the fabric inside is prepped to burst into flames, it will only do so once the cargo craft is refilled with trash and released at the end of its mission. It has four different relays that must be activated independently by Orbital ATK before the experiment begins.

The detail on those precautions was "one of the first questions that we got from when we first said, 'We want to start a large fire on your spacecraft,'" Gary Ruff, co-investigator for Saffire at NASA's Glenn Research Center in Cleveland, said in a media teleconference. "Once you get people calmed down that you really do mean that you're going to do it safely, things became much easier." Two of the relays provide computer control to activate the experiment, while two others power the igniter — and Orbital ATK "will monitor those all the time during the flight, during launch, to make sure that they stay open and that there's no chance that we could start a fire."

Once the craft separates from the space station, in about two months, it will navigate to a safe distance from the station and then ignite, setting a meter-long (3.3. feet) sample on fire inside the box. Though astronauts have studied fire in space before, this will be the biggest experimental fire yet, and researchers said they hope to learn how large-scale fires spread in microgravity. Two other experiments, Saffire-2 and Saffire-3, will fly on later missions to further probe the spread of fire in space.

Cygnus will stick around in orbit for two weeks to transmit the data, and then will plunge down to burn up in the atmosphere.

That burning-up could potentially be caught by another experiment heading up to the station, called Meteor Composition Determination (Meteor) — a camera that will peer down toward Earth to catch meteor showers from a new perspective and analyze their composition. When not in use for meteor showers, the camera will also observe the Earth and even to catch departing spacecraft re-entering the atmosphere, said Michael Fortenberry, Meteor principal investigator and researcher at Southwest Research Institute in San Antonio. After the camera was lost in the explosions of two previous failed cargo launches, they've rebuilt Meteor for a third time to send into orbit, he added during the teleconference.

When NASA sends spacecraft to land on meteorites or asteroids (or even pluck a boulder from an asteroid and tow it near the moon), the agency needs detailed information on how the soil-like substance, called regolith, that covers the asteroids behaves. To find out, researchers are sending a series of four tubes up to the space station, each packed with a different simulation of the dusty substance. The experiment is called Strata-1, and it will monitor the substances — ranging from small glass beads to real, pulverized meteorite — as they flow in microgravity over the course of a year.

"We don't know exactly how or to what extent [the material moves over time], we don't know the extent of the hazards that an astronaut would face in trying to move under those conditions," Strata-1 principal investigator Marc Fries, from NASA's Johnson Space Center in Houston, said in the teleconference. "It's a very practical problem. … If you go up to an asteroid and you set an anchor in, is your anchor going to hold? Or are you just going to pull a bunch of material free when you pull taut on the anchor?"

Five test Gecko Grippers will fly to space as well. These adhesive devices use a mechanism similar to a gecko's feet to attach and detach from flat surfaces. While flat sample-panels are all that's flying this time around, principal investigator Aaron Parness, of NASA's Jet Propulsion Laboratory's Extreme Environment Robots Group, said he hopes to someday use the grippers as the feet of crawling robots or landing gear for flying robots that could operate outside the space station. [Gecko Feet Inspire Climbing Space Robots]

Cygnus is also bringing aboard more than two dozen nanosatellites that will be ejected from the spacecraft and the space station itself to perform mini-tests and observations with new technologies. Additionally, the craft will bring a permanent 3D printer that will be able to remotely build parts and experiments for use on the space station. The printer, built by Lowe's Innovation Labs and Made in Space, will support the space station crew, other researchers, private industry and educators who want to experiment on the station, said Matt Napoli, vice president of in-space operations for the project, called Additive Manufacturing Facility, for Made in Space in California.

It will even be able to build "extremely optimized structures that would otherwise collapse on themselves in a normal 1-G environment," Napoli told Space.com. "There are many proposed applications for this, ranging from printing bone scaffolding for growing new human bone to [printing] extremely low-mass space structures."

All of that, plus essential space station supplies and spacewalking gear for the astronauts, will await the space station crew when the hatches between the cargo craft and space station open. Then it's time to get busy.

"It's like Christmas when a supply craft arrives," Dan Tani, senior director of mission cargo and operations at Orbital ATK, as well as a former shuttle and space station astronaut, said in a statement. "It's always fun to watch another vehicle approach, and then it's like opening a box of goodies and finding some stuff you've been wanting and some surprises you don't know about."