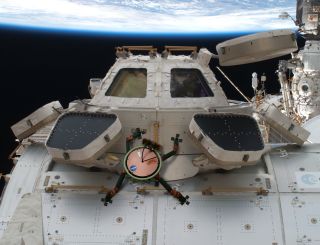 This artist's concept shows how a future robot called LEMUR (Limbed Excursion Mechanical Utility Robot) could inspect and maintain installations on the International Space Station. The robot would stick to the outside using a gecko-inspired gripping system.
(Image: © NASA/JPL-Caltech)

NASA robots may climb the walls of the International Space Station one day using grippers inspired by the super-adhesive feet of geckoes.

"We might eventually grab satellites to repair them, service them, and we also could grab space garbage and try to clear it out of the way," JPL engineer Aaron Parness said in a statement.

Gecko feet aren't sticky in the same way that tape is. Rather, the lizards rely on millions of tiny hairlike protrusions that become powerfully adhesive when bent due to a phenomenon called van der Waals forces.

Because the electrons orbiting a molecule's nucleus aren't evenly spaced, even a neutral (uncharged) molecule has a positive side and a negative side. The positive side of one molecule attracts the negative side of neighboring molecules, and vice versa, generating the "stickiness" that allows geckoes to scuttle up walls and across ceilings with ease.

The lizards can turn this adhesive force on by pushing their feet down and bending the tiny "hairs," Parness said.

"This is how the gecko does it, by weighting its feet," he said.

The JPL team's gecko gripper works in pretty much the same way. Parness and his colleagues created a material studded with synthetic hairs, each of them much smaller than a human hair. When this material is pushed against a surface, it adheres.

The latest generation of grippers can support more than 150 Newtons of force, which is the equivalent of 35 lbs. (16 kilograms), researchers said.

The gripping system doesn't lose its stickiness over time the way tape does, researchers added, and it should work well in all environments — even those featuring extreme temperatures, pressures and/or radiation conditions.

Parness and the team have already started testing out the gecko gripper in the microgravity environment, using the technology to grab and manipulate objects during parabolic airplane flights.

The researchers have also affixed gecko-gripper feet to a climbing robot called Lemur 3, which can clamber over simulated solar panels and other spacecraft parts as a result.