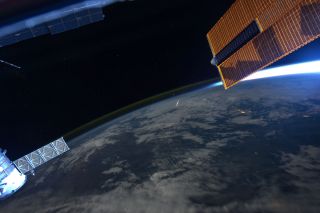 After two explosive setbacks, a meteor experiment designed to track "shooting stars" from space is again poised to launch to the International Space Station — and scientists are hoping the third time's the charm.

Michael Fortenberry, principal investigator on the mission, called Meteor Composition Determination (Meteor for short), and a researcher at Southwest Research Institute in San Antonio, is eager to finally turn the tool's high-resolution camera toward the many meteor showers that rain down on Earth's atmosphere after the camera is delivered to the space station this week. The experiment will launch tonight on Orbital ATK's Cygnus cargo ship, with liftoff set for 11:05 pm EDT (0305 GMT) from Cape Canaveral Air Force Station in Florida. You can watch the Cygnus launch live on Space.com beginning at 10 p.m. EDT (0200 GMT), courtesy of NASA TV.

"This is actually the third Meteor instrument that we've built," Fortenberry said at a news teleconference March 15. "The first Meteor instrument was destroyed with the Orb-3 Cygnus launch at the very end of October in 2014 — we got the ground spare and got it ready for flight, and it was launched on SpaceX [CRS-]7 last June, which was destroyed." [Related: Sticky, Explosive Science Riding Cygnus Spacecraft to Space Station]

"It's been in — not quite development — but just building one after the other for the last year or so," he added.

Dust and debris left in the wake of comets regularly rain down on Earth's atmosphere as meteors, glowing from the friction of plowing through air particles. The objects usually vaporize during the process — ones that make it all the way down to Earth earn the title "meteorites." Meteor showers happen when the Earth passes through a comet's path, which happens regularly throughout the year.

The Meteor experiment will take advantage of the space station's unique vantage point to see far more than eager Earth-based skywatchers can. It was developed as a collaboration among the Southwest Research Institute, the Center for the Advancement of Science in Space, and Japan's Planetary Exploration Research Center at the Chiba Institute of Technology.

"[The] Meteor [experiment] will be mounted in the U.S. National Lab on the station in the Window Observational Research Facility, or WORF— like the Klingon security officer in 'Star Trek: The Next Generation,'" Fortenberry said. Peering from this unique vantage point, the camera will be able to film, and determine the composition of, meteor showers big and small when the station is in darkness — and even search for meteor showers too tiny to be noticed from Earth's side of the atmosphere. (Plus, researchers will use the camera to survey Earth and watch spacecraft leaving the station re-enter the atmosphere.)

The tool consists of an off-the-shelf high-definition camera with a special grating that can be added to the lens to split the light coming from the meteors into its different wavelengths, which will help determine what the particles are made of. Astronauts on board will stop by to change the diffraction grating for gathering different measurements or ordinary video.

Back on Earth, the researchers will be able to download occasional videos from the device, but there is way too much data for it all to be sent down. Instead, the researchers are also sending up 35 hard drives to be filled with the camera's observations that can be brought down from space over time.

Fortenberry said the researchers took the time to make a couple of tweaks for the experiment's third iteration: adding a lens with a wider field of view, and fitting the diffraction grating to the lens in a different way that will be easier for the astronauts to operate.

This time, Meteor is heading to space aboard Orbital ATK's Cygnus spacecraft with a United Launch Alliance Atlas rocket, which will also bring supplies for the astronauts living on the space station as well as several new experiments to run on the giant orbiting lab.