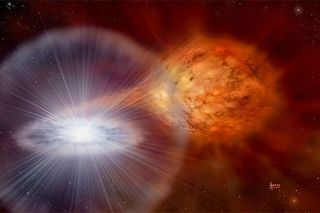 An artist's rendering of an exploding star. Billions of years ago, dust from a stellar explosion like this may have made its way to Earth.
(Image: © David Hardy)

Microscopic dust grains extracted from meteorites that landed on Earth had ancient and explosive origins, scientists have discovered.

The dust grains — also known as presolar grains, since they're older than Earth's sun — were likely spewed out by stars that blew up hundreds of millions of years before Earth's solar system formed. And in a new analysis of data collected from these tiny particles, researchers have come closer to pinpointing the type of stellar blast that produced the dust, 5 billion years ago.

To trace the origins of the stardust's subatomic "fingerprints," scientists built computer models simulating the explosive conditions that could have produced them, to test whether the dust grains' point of origin might have been an exploding white dwarf star in a double-star system. [Images: Dust Grains from Interstellar Space]

This study adds to decades of analysis devoted to puzzling out the age and origins of these presolar grains, according to study co-author Christopher Wrede.

Wrede, an assistant professor of physics at Michigan State University, told Live Science in an email that researchers look at the grains' isotopes — variations of an element that have different numbers of neutrons. About a dozen grains held a great deal of the isotope silicon-30, which has been linked to a certain type of stellar explosion called a classical nova.

Classical novas — stellar eruptions that happen in a binary, or paired, star system — are different from supernovas, Wrede said, in that they are a type of explosion that can happen over and over again. The smaller star in a pair, a white dwarf, steals fuel from its larger neighbor, heating up its own surface and eventually blasting dust and gas into space.

"After a classical nova, the white dwarf can continue to siphon fuel from the companion and ignite again," Wrede said. "In a supernova, the entire star explodes, so it can only happen once."

When Earth's solar system was forming, collisions heated and mixed the building blocks of dust and gas, cooking them uniformly so that they shared many of the same isotopes. Grains with unusual isotopes — like silicon-30, which is rare on Earth — stand out, Wrede explained. "This tells us that they must have been produced prior to the formation of the solar system," dating back around 5 billion years, Wrede said.

"The pathway seems to be a strong one, but we'll need to do more experiments to find out how strong," Wrede told Live Science.

The findings were published online March 8 in the journal Physical Review Letters.