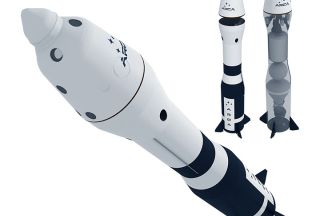 PASADENA, Calif. — A company that has it roots in a Romanian venture that competed for the Ansari X Prize more than a decade ago plans to carry out tests of high-altitude drones and suborbital rockets at New Mexico’s Spaceport America, spaceport officials announced Sept. 1.

ARCA Space Corporation, based in Las Cruces, New Mexico, plans to use the spaceport for flight tests of its AirStrato UAS drone starting near the end of this year. That will be followed in 2016 by tests of its Haas suborbital rocket, which the company ultimately intends to use for suborbital space tourism flights, carrying up to five people.

"Only in New Mexico did we find the perfect combination of aerospace assets, airspace and affordability," Dumitru Popescu, chief executive of ARCA Space, said in a statement about the company's plans to operate from Spaceport America. [Spaceport America: A Reporter's Photo Tour]

The deal was the consummation of a decade of discussions about operating from New Mexico, said Aaron Prescott, head of business development for Spaceport America, in a Sept. 1 interview. ARCA first visited the state in 2005 when it attended the inaugural X Prize Cup held in Las Cruces. "We've stayed in touch ever since, and their technology and business model is now to the point where they’ve decided to make the move," he said of ARCA.

Popescu founded ARCA, derived from the Romanian acronym for the Romanian Cosmonautics and Aeronautics Association, as a non-profit organization in 1999. It competed unsuccessfully in the $10 million Ansari X Prize suborbital spaceflight competition, but continued to develop both suborbital rocket and high-altitude drone technology after the end of the competition. It incorporated in the U.S. as ARCA Space in 2014.

ARCA Space will initially use existing Spaceport America facilities, including its runway for drone tests and vertical launch site for rocket tests, Prescott said. The company may develop dedicated facilities there if its activities increase in the future, he added.

The ARCA Space agreement is the latest effort by Spaceport America to diversify its customer base beyond its anchor tenant, Virgin Galactic. In May, the spaceport announced a deal with a California company, X2nSat, to establish a satellite ground station at the spaceport. Both ground stations and drones are part of the spaceport’s long-term business strategy, developed earlier this year, Prescott said.

Spaceport America is also retaining ties with SpaceX, even as that company delays plans to conduct flight tests there. SpaceX leased property at the spaceport in 2013 for high-altitude flights of its Grasshopper and F9R vehicles , intended to test technologies intended for reusable versions of the Falcon 9. Prescott said that while those flights did not take place, SpaceX is still maintaining its lease and may return for other flight tests.

Prescott said other companies, in both the aerospace field and other industries, are interested in using the spaceport. "We've got a growing pipeline of aerospace users," he said, as well as some filming and other non-aerospace activities that he expected to be announced in the next few months.