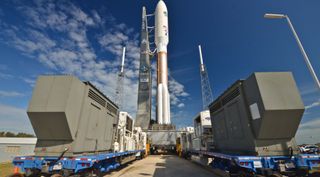 Rollout of MUOS-1 attached to an Atlas 5.
(Image: © ULA/Pat Corkery)

The unsolicited bid is the latest twist in what has been a topsy-turvy year for ULA, the primary U.S. government launch services provider.

The proposal is still in discussion, but an announcement could come as early as the week of Sept. 14 at the annual U.S. Air Force Association conference, to be held at National Harbor, Maryland, the source said. [Awesome Atlas V Rocket Launch Photos]

Aerojet Rocketdyne's bid starts at $2 billion, but could go higher after the company does its due diligence, the source said.

Denver-based ULA operates and owns the production rights for the Atlas V and Delta IV rockets, which together launch the vast majority of U.S. government payloads. The Boeing-Lockheed Martin joint venture, established in 2006, also owns a rocket production plant in Decatur, Alabama, and launch infrastructure at Cape Canaveral Air Force Station in Florida and at Vandenberg Air Force Base in California.

ULA faces an uncertain future owing to a congressional ban on the Russian-built RD-180 engine that powers its workhorse, the Atlas V, and a competitive challenge in its government market from upstart SpaceX. Congress appears willing to fund a U.S.-built RD-180 replacement, and Aerojet Rocketdyne is developing one called the AR-1, but ULA last September announced plans to use an alternative built by the secretive Blue Origin rocket company owned by Amazon.com founder Jeff Bezos.

Kent, Washington-based Blue Origin's planned BE-4 uses a different type of fuel than the RD-180 and as such cannot be retrofitted into the current Atlas V design. ULA, which plans to phase out all but the largest variants of the high-priced Delta IV, in April unveiled a new rocket design called Vulcan that accommodates the BE-4. The new vehicle, to debut around 2020, would essentially be an Atlas 5  outfitted with a new, larger first stage, at least in its initial incarnation.

But Boeing and Lockheed Martin, who control ULA's purse strings, have yet to agree to invest the roughly $1 billion that ULA says it needs to develop the Vulcan. Blue Origin is funding development of the BE-4, also to the tune of about $1 billion, ULA says.

In May, a consortium of three companies including Aerojet Rocketdyne asked the U.S. Department of Defense about the possibility of obtaining production rights to  the Atlas V. ULA rebuffed that overture.

A purchase of ULA, if approved by the parent companies and the government, would be a dramatic turnaround for Aerojet Rocketdyne, which was stung by ULA's decision to go with the BE-4 over the AR-1. ULA continues to fund work on the AR-1, but views that engine as a backup in case Blue Origin falters in its engine effort.