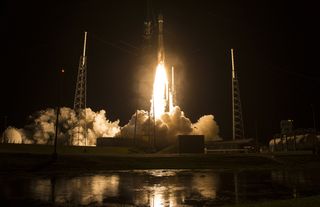 No such thing as a free launch.
(Image: © NASA/Aubrey Gemignani/EPA)

I don't suppose that readers would expect me to contradict the title of this article – that would be tantamount to signing my own redundancy notice. But, given an environment where phrases such as "pay restraint," "austerity package" and "falling service provision" are bandied around, it might be thought somewhat profligate to suggest that millions of pounds (euros, dollars) are spent on exploration of space.

Why do we need to go to Mars? How many pictures of galaxies do we need? Surely that money could be better spent on more worthy areas, such as health and education?

But the millions do not go up in smoke: they are used to pay for jobs and services.

Rockets and spaceflight instruments do not assemble themselves. They are designed and built by people, who get paid. They are fabricated from components which have to be manufactured and then purchased. The community engaged in the space industry includes specialist scientists and engineers, designers, graphic artists and IT professionals, as well as a vast support system: HR, catering, cleaning, etc.

This is where much of the space budget is spent - on salaries that in turn generate a market for other goods and services (houses, clothing, food) – as well as returning funds to the government through taxation. In fact, the European Space Agency might be regarded as a massive money-spinning operation, in which every euro contributed by the government is returned ten-fold to the nation in terms of the value of the jobs generated.

How the space budget is spent is just one of the major benefits which comes from the UK's space industry, one of the fastest-growing sectors of the UK economy.

There are other spin-offs, because "space" is much closer than is generally thought. When talking about space, people usually think about stars and galaxies, wonderful images from telescopes, Neil Armstrong walking on the Moon, the rings of Saturn, and so on.

Looking much closer to home, the armada of satellites orbiting the Earth that, among many other things, beam information to satellite navigation systems, broadcast television programmes and monitor the weather are part of a global space network. Where would we be now if we didn't have the internet? These are daily services which we take for granted, and are rarely, if ever, considered as "space exploration."

Along with an understanding of what goes into space exploration comes an appreciation of the people who help to make space exploration happen: teachers. Without their inspirational support and guidance, we would not have succeeding generations of engineers, scientists and other specialists who make the UK’s space industry so successful.

But the UK has been so successful in growing its space industry, it doesn't have enough "homegrown" specialists to employ. So we need more teachers, more trained scientists and engineers – and more space industry.

Is space a waste of money? Certainly not.

The author recently gave a talk on this topic at the Cheltenham Science Festival.

Monica Grady is Professor of Planetary and Space Sciences at The Open University.