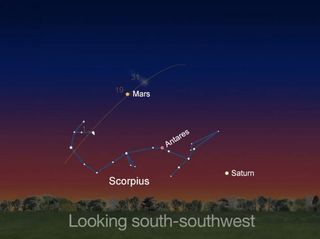 A comet is on course for a super-close approach to the planet Mars this Sunday (Oct. 19) in a rare celestial encounter. And if you have a moderate-size telescope, you just might be able to spot the icy wanderer as it nears the Red Planet, weather permitting.

The comet in question is Comet Siding Spring, which was discovered on Jan. 3, 2013 by the Scottish-Australian astronomer Robert H. McNaught, a prolific observer of both comets and asteroids. McNaught has discovered 82 previously unseen comets, including a stupendously bright one that briefly became visible to the naked eye in broad daylight in January 2007.

When it was discovered, Comet Siding Spring was 669 million miles (1.07 billion kilometers) from the sun. Soon after, astronomers identified the comet in images taken on Dec. 8, 2012 (before its official discovery) by the Catalina Sky Survey in Arizona. Based on its orbital characteristics, the comet is apparently a new or "virgin" comet, traveling in a parabolic orbit and making its very first visit to the vicinity of the sun. It will pass closest to the sun (called perihelion) on Oct. 25 at a distance of 130 million miles (209 million km).

But the exciting point of Comet Siding Spring's inner solar system visit will come on Sunday, Oct. 19, when it will make a close flyby of Mars. The comet will make its closest approach to Mars at 2:28 p.m. EDT (1828 GMT), hurtling by at about 126,000 mph (202,777 km/h). The celestial encounter will provide an unprecedented opportunity for scientists to gather data on both the comet and its effect on the Martian atmosphere.

The very latest calculations suggest that at closest approach, Comet Siding Spring will come to within 86,200 miles (138,700 km) of Mars. That's only 36 percent of the average distance from Earth to the moon, and 16 times closer than any known comet has ever come to the Earth. In 1770, Lexell's Comet passed us at a relatively wide 1.4 million miles (2.3 million km).

Telescope needed to see the comet

If you had the chance to stand on Mars during Comet Siding Spring's closest approach on Sunday, the comet would appear to shine at a super dazzling magnitude -6 on the brightness scale used by astronomers. That's about three times brighter than the brilliant planet Venus appears in Earth's night sky.

However, since the comet will be about 151 million miles (243 million km) from Earth, it will appear much, much dimmer from our point of view. In fact, based on recent observations, we should not expect the comet to get any brighter than 10th magnitude. That's about 60 times dimmer than the faintest star visible to the eye without any optical aid.

In order to locate such a fuzzy and rather ill-defined object as a Siding Spring, you'll need a dark sky and a moderate-sized telescope that can pick out the comet's fuzzy image.

While small telescopes and even large binoculars can bring stars as faint as magnitude 10 into view, keep in mind that a star is a sharp point of light, while the comet will likely be a wispy smudge whose contrast might not be much different than the background sky behind it.

I would strongly recommend a telescope of at least 8-inch aperture. Try using magnifications ranging from between 200 and 400X to refine your view.

Normally you would also need a good sky atlas to spot a telescope-only comet, but on Sunday evening you'll be able to use Mars as a convenient benchmark. (Editor's Note: The following measurements use degrees to denote positions in the night sky. As a reference, your closed fist held at arm's length covers about 10 degrees of the night sky.)

For observers at latitudes of 40 degrees north, Mars can be found about 17 degrees above the horizon in the southwestern sky about 45 minutes after sunset, and will set about two hours later.

For Europeans, the comet will be hovering just above Mars as darkness falls. It will literally appear just a fraction of a degree from the Red Planet in telescope views. For comparison, the apparent width of the moon is equal to a half degree. [How Much Do You Know About Comets? Take Our Quiz to Find Out]

By the time darkness arrives for eastern North America, Comet Siding Spring will have moved away from Mars towards the northwest (upper right). At that time, the comet will be less than a quarter of a degree from Mars.

At dusk as seen from the West Coast of North America, the comet and planet will appear a bit farther apart, but still, less than a half degree will separate them.

No meteor hurricane on Mars

Last March, a prediction was issued by Jeremie Vaubaillon, an astronomer at the Institute of Celestial Mechanics and Calculation of Ephemerides in Paris, that a "meteor hurricane" would hit Mars as Comet Siding Spring passed by.

But Vaubaillon has since taken that forecast off the table.

Last month, at the International Meteor Conference in Giron, France, Vaubaillon pointed out that his original model was based on an estimated nucleus size of 30 miles (50 km), which was determined from the high brightness of the comet at a large distance. Since then, the comet's brightness has been found to be due to a much smaller nucleus (about 0.4 mile; 700 meters), which had a large coma caused by low surface gravity and low ejection rates.

Those low ejection rates mean that while Mars will be within the comet's gaseous coma, it probably will not be inside the comet's main debris field when it whizzes by. That's good news for spacecraft operators with NASA, India and the European Space Agency in control of the fleet of spacecraft currently orbiting Mars. India's first Mars probe, the Mangalyaan orbiter, and NASA's new MAVEN spacecraft just arrived at the Red Planet last month.

Still, some of those Martian probes — both on the surface (the Curiosity and Opportunity rovers) and in orbit around the Red Planet — should have a spectacular view of the comet during the close Mars flyby. It may even be possible to acquire high-resolution images of the comet from NASA's Mars Reconnaissance Orbiter, though its camera was never specifically designed for this particular purpose!

Editor's note: If you plan to track the Comet Siding Spring with a telescope and capture an image of the comet, let us know! You can send images and comments in to Space.com at: spacephotos@space.com.