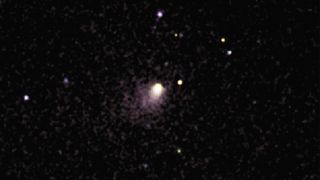 NASA's Swift satellite photographed comet Siding Spring, on its way to rendezvous with Mars in 2014, some time between May 27 and May 29.
(Image: © NASA/Swift/D. Bodewits (UMD), DSS)

Several spacecraft from NASA, Europe and India were expected to track the comet's approach  from their positions in orbit around Mars, while NASA's Curiosity and Opportunity rover were slated to observe the comet from the Martian surface. Find out more about the close flyby of Comet Siding Spring with Space.com's complete coverage of the comet close approach below:

Updates for Oct. 19: Comet Buzzes Mars in Once-in-a-Lifetime Flyby
The Comet Siding Spring has successfully zoomed by Mars in a super-rare close encounter that is one for the history books. See how it happened here. Video: Everything You Need to Know about Comet Siding Spring

Editor's Note: If you plan to track the Comet Siding Spring with a telescope and capture an image of the comet, let us know! You can send images and comments in to Space.com at: spacephotos@space.com.

Find out how to watch the epic Mars flyby of Comet Siding Spring live on Oct. 19 in a series of webcasts by the Slooh Community Observatory and others.

Comet Siding Spring at Mars: How a Rare Celestial Event Was Discovered
A veteran comet hunter discovered Comet Siding Spring in 2013, a discovery that stunned astronomers when they realized the comet would have a super-close encounter with Mars on Oct. 19, 2014. See the story of the comet here.

Comet Will Buzz Mars Sunday: How to See It in Telescopes
Find out how to see Comet Siding Spring fly past Mars using a telescope on Earth Sunday (Oct. 19).

Historic Flyby: Comet to Zoom By Mars This Weekend
Find out more about Mars' epic encounter with a comet on Oct. 19.

As Comet Nears Mars, NASA Gears Up for Epic Encounter
NASA spacecraft orbiting the Red Planet are grearing up for the Comet Siding Spring encounter on Oct. 19. Find out how ground controllers are preparing here.

NASA Prepping Mars Probes, Rovers for Close Comet Flyby
The fleet of spacecraft now orbiting Mars, as well as two rovers on the Red Planet's surface, are in prime position to see the Comet Siding Spring as it buzzes the planet. See how NASA is keeping its spacecraft safe.

Mars-Bound Comet Sprouts Twin Jets in Hubble Telescope Photos
Wow! Comet Siding Spring, which is making its way toward an Oct. 19 date with Mars, has sprouted a pair of jets. NASA's Hubble Space Telescope has the photos.

NASA Sees Comet That Will Buzz Mars This Year (Photo)
A NASA space telescope has captured a glimpse of Comet Siding Spring, kicking off 2014 ahead of its close Mars flyby on Oct. 19.

Could Upcoming Comet Flybys Damage Mars Spacecraft?
When a comet buzzes Mars on Oct. 19, 2014, will it endanger the precious spacecraft currently orbiting the Red Planet. Here's what we know.  (Published Sept. 19, 2013).

Newfound Comet Likely Won't Hit Mars Next Year
Comet Siding Spring will likely not smash into Mars when it buzzes the planet on Oct. 19, 2014. See how NASA knows. (Published April 15, 2013).

Mars vs. Comet in 2014: Scientists Prepare for Red Planet Sky Show
An unprecedented comet flyby or Mars in 2014 has scientists excited for a potentially amazing and rare celestial event. (Published March 29, 2013).

New Comet's Potential Mars Collision in 2014 Explained
The potential collision of a comet on Mars is giving scientists some food for thought ahead of the historic 2014 encounter. (Published March 4, 2013).

Could a Comet Hit Mars in 2014?
A newfound comet has Mars in its crosshairs, but will it really hit the Red Planet? Here's what scientists know about Comet Siding Spring (C/2013 A1). (Published March 4, 2013).

How Far Away is Mars?