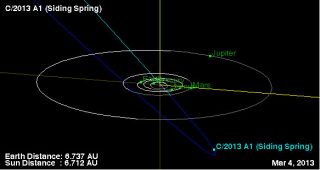 A newfound comet is apparently on course to have an exceedingly close call with the planet Mars in October 2014, and there is a chance — albeit small — that the comet may even collide with the Red Planet.

The new comet C/2013 A1 (Siding Spring) was discovered Jan. 3 by the Scottish-Australian astronomer Robert H. McNaught, a prolific observer of both comets and asteroids who has 74 comet discoveries to his name.

McNaught is a participant in the Siding Spring Survey a program that hunts down asteroids that might closely approach the Earth. He discovered the new comet using the 0.5-meter Uppsala Schmidt Telescope at Siding Spring Observatory, New South Wales, Australia.

Pre-discovery images of the comet from Dec. 8, 2012 by the Catalina Sky Survey in Arizona were quickly found. Because the comet was discovered as part of its survey for asteroids, it bears the name of the observatory, Siding Spring. Officially it is catalogued as C/2013 A1.

When it was discovered, Comet Siding Spring was 669 million miles (1.07 billion kilometers) from the sun.  Based on its orbital eccentricity, it is apparently a new or "virgin" comet, traveling in a parabolic orbit and making its very first visit to the vicinity of the sun. It is expected to pass closest to the sun (called perihelion) on Oct. 25, 2014 at a distance of 130 million miles (209 million km).

But, less than a week earlier, on Oct. 19, 2014, the comet — whose nucleus is estimated to be anywhere from 5 to 30 miles (8 to 50 km) in diameter — is projected to cross the orbit of Mars and pass very close to that planet. Preliminary calculations suggest that nominally at closest approach, Comet Siding Spring will come to within 63,000 miles (101,000 km) of Mars.

However, because the comet is currently very far out in space and has been under scrutiny for less than three months, the circumstances of its orbit will likely need to be refined in the coming weeks and months.  As such, the comet's approach to Mars might ultimately end up being farther or closer than what current predictions suggest.  In fact, last Wednesday (Feb. 27) observations made by Leonid Elenin, a reputable Russian astronomer who works at the Keldysh Institute of Applied Mathematics,suggested that the comet could pass even closer — just 25,700 miles (41,300 km) from the center of Mars.

According to Elenin: "On the 19th October 2014, the comet might reach apparent magnitude of -8 to -8.5, as seen from Mars!”  (This would make the comet 15 to 25 times brighter than Venus).  "Perhaps it will be possible to acquire high-resolution images from the Mars Reconnaissance Orbiter (MRO)," he added.

Then there is also the small possibility that the comet could collide with Mars.

Moving at 35 miles (56 km) per second, such a collision could create an impact crater on Mars up to ten times the diameter of the comet's nucleus and up to 1.25 miles (2 km) deep, with an energy equivalent up to of 2 x 10^10 megatons!

Most readers will recall Comet Shoemaker-Levy's plunge into Jupiter in July 1994 which left dark telltale scars on Jupiter’s cloud tops for many months thereafter.

Collision or not, Comet Siding Spring will definitely come extremely close to Mars less than 20 months from now. Incredibly, this will actually be the second close shave of Mars by a passing comet within a time span of just over a year.

On Oct. 1 of this year, the much awaited Comet ISON is due to pass 6.5 million miles (10.5 million km) from Mars on its way toward a grazing encounter with the sun in November. That rendezvous is close enough in its own right to be categorized as exceptional and yet, Siding Spring will approach about 100 times closer.

SPACE.com we will keep you posted of all the latest developments regarding the remarkably close approach of Comet Siding Spring to Mars. Stay tuned!